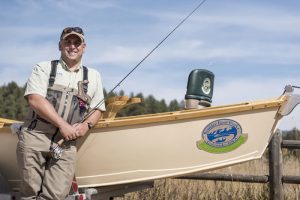 Trout Unlimited has announced that Kirk Deeter will join the organization’s senior staff as its Vice President of Trout Media.

Deeter is a veteran of the fly-fishing industry. He currently is the editor of TU’s quarterly magazine, Trout, and is also editor-at-large for Field and Stream magazine. He is the founder and publisher of Angling Trade, a fishing industry trade magazine.

“Kirk has a proven track record for success,” said TU President and CEO Chris Wood. “Everything he has touched over the past decade has turned to gold and I expect that to continue with his leadership of Trout Media.”

Deeter assumed editorship of Trout in 2012. The 100-page spring issue was the largest in the magazine’s history.

“I want to make Trout Media the ‘conscience’ in this space,” said Deeter, who lives in Colorado. “We have great talent and expertise in the organization, and if I can simply channel that to greater effect, I will be happy. This is my home. Always has been and always will be.”

Deeter, whose first day in the new role is Sept. 1. He will continue to helm the staff at Trout, but will be less involved with the magazine’s day-to-day production.

“Joel’s contributions to TU over the past two-plus years were invaluable and we wish him every future success,” Wood said. “We are lucky to be able to promote someone from within who truly bleeds blue and green.”