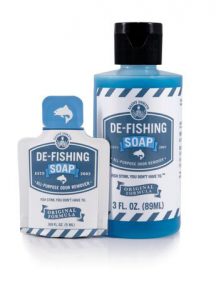 Two San Diego businessmen are bringing a revolutionary new odor-­?removing hand soap,  De-­?Fishing Soap, to the masses this month, complete with a nationwide push in over 1,200 Walmart stores. For the past decade, the liquid soap, available in 3 oz bottles and and 5ml travel packs, has been garnering a strong local following in specialty tackle shops and sporting goods stores throughout San Diego. Company owners and avid watermen, David Leon and Nate Gaudioso, purchased the company in 2014 from a Craigslist ad they saw while searching for a boat motor.  Immediately taken with the product’s performance, and combined with their love of fishing and watersports, the two quickly decided to purchase and market De-­?Fishing Soap to a wider audience.

De-­?Fishing Soap is uniquely formulated to deactivate and wash away fish and seafood odors and oils. Invented by the soap-­?making wife of an avid fisherman to remove lingering fish and bait odors, De-­?Fishing Soap is already a favored product among California fishermen, surfers and more, including notable professionals in saltwater and freshwater fishing and ocean sports. Its unique, patent pending formulation harnesses the natural cleaning power of essential oils to effectively lift and rinse away odors from hands and surfaces, with a pleasing licorice/anise after-­?scent which is also a known fish attractant. As well as sport, recreational and commercial fishermen, De-­?Fishing Soap also appeals to freshwater fisherman, backpackers, home cooks and professional chefs, as it attacks odors associated with cooking, camping, fuel, clothing and smoke.

The company landed the big fish of retailers right off the bat, pitching Walmart stores with a hands-­?on demonstration involving canned salmon that immediately convinced Walmart executives and secured a nationwide distribution deal. Building off of their Walmart success, the company has set long-­?range goals to position itself as a national leader in odor buy xanax online no prescription mastercard elimination, and becoming a household name in the process.

Said De-­?Fishing Soap president David Leon, “As heavy users of the soap ourselves, before buying the company Nate and I knew the power of the product, and realized it solves a problem that plagues every fishing enthusiast, not to mention their friends and family members. It can be a smell that tends to linger long after the boat is docked.  The more customers we spoke with, the more we knew they had an exceedingly loyal customer base, and we saw a lot of potential in expanding its availability beyond our home of San Diego.”

“We love this area and especially love doing business here,” said De-­?Fishing Soap CEO Nate Gaudioso. “We discovered this local product that was clearly a great fit for consumers everywhere, and we wanted to take it to the next level. If you know how stinky and stubborn fish smells are, it’s obvious that a product that can eliminate those will be amazing for cleaning off and eliminating any odor you can think of.”

High profile anglers are also no strangers to De-­?Fishing Soap. Their fan base includes Bassmaster Elite Series competitor, Carl Jocumsen, along with Jason Muenzer, First Mate aboard the Hard Merchandise, a commercial fishing boat featured on National Geographic Channel’s Wicked Tuna. “I use the soap every trip! We even use it on the boat deck when we clean it.”

First formulated in 2003 in San Diego, Saint Inky’s De-­Fishing Soap® was created by the wife of an avid fisherman to remove lingering fish and bait odors. De-­Fishing Soap has won praise from fishing, hunting, and outdoor enthusiasts the world over. Its unique, patent pending formulation harnesses the natural cleaning power of essential oils to effectively lift odors from hands and surfaces. For more info visit www.defishingsoap.com