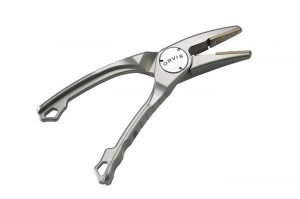 Orvis has a very slick, stealth fighter-looking special edition version of the popular Helios2 that it will start selling in November, in time for the holidays.  That’s a purely aesthetic deal, but it’s legitimately interesting, and I’m sure it will gain some niche traction.

The bigger news from Orvis, however, is a new high end Mirage reel (more on that later), as well as some very intriguing pliers, and nippers—all forged of military-grade aluminum, and perhaps more importantly, made in the United States (in fact, in Vermont).

Of all the products I saw today, I can’t get the pliers out of my head.  They are ergonomically curved, and they just feel comfortable in the hand.  They translate “purpose” and you can use them effectively with your eyes closed.

As a test, I clamped down on a piece of paper with the pliers, and had Tim Romano tug on the paper.  It didn’t slip.  In fact, it tore out a perfect little shape that exactly matched the nose section of the pliers.  Retail is $249 for the pliers, and $79 for the nippers.

It’s always hard to judge how accessories are going to perform, but given what we’ve seen in the past few years (since that time before anyone believed anglers would buy nippers for more than 10 bucks) I think these products will all do very well.  Especially with the Orvis marketing machine behind them.