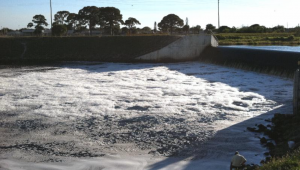 Current water management practices in Florida are gravely threatening Florida’s recreational fisheries. At the center of this crisis are the Florida Everglades, where natural freshwater flows have been severely disrupted.

Research long ago established that changes to freshwater flows into estuaries causes significant negative impacts to the ecosystem. These changes can kill seagrasses, oysters, fishes, and other organisms that are important to the estuary ecosystem. From an angler’s perspective, these changes negatively impact gamefish – there are fewer prey items, less habitat, and the poor water quality can impact fish health. The way that water flows in the Florida Everglades are currently managed is causing damaging changes to freshwater flows into estuaries and wreaking havoc on the ecosystems.

At present, many billions of gallons of polluted freshwater are being discharged every day from Lake Okeechobee into the Caloosahatchee River and the St. Lucie River and Estuary. These areas are unfishable. Algal blooms are widespread.

In contrast, so little freshwater is reaching Florida Bay that the waters of Florida Bay are hypersaline (too salty), which has resulted in a large-scale die-off of seagrass, an extensive algae bloom, and numerous fish kills.

The Indian River Lagoon, into which the St. Lucie River drains, is experiencing a massive brown tide. The St. Lucie Estuary recently posted health warnings to avoid contact with the water.

These recreational fisheries and habitats are in crisis.

Before the Everglades were modified, natural freshwater flows sent the right amount of freshwater to Florida Bay via sheet flow, and much less water to the east and west coasts, which supported healthy habitats and healthy fisheries. Now altered flows and water management send insufficient freshwater to Florida Bay and too much water is released to the northern estuaries. These changes in freshwater flow result in the algae blooms, seagrass die-offs, fish kills, and other environmental impacts that are currently ongoing.

The last time water alterations were this severe, in the early 1990s, Florida Bay suffered catastrophic algae blooms and seagrass die-off, which had severe negative impacts on the recreational fishery that are still felt today. Now, we fear a repeat of the catastrophe of the 1990s is under way. Florida Bay is the “Canary in the Coal Mine” for Florida’s recreational fisheries, and rings alarms bells for the entire region, from the Caloosahatchee River and Charlotte Harbor to the St. Lucie River and Indian River Lagoon.

What needs to happen? Appropriate freshwater flows need to be restored!

*The plans to make this happen are in place – known as the Comprehensive Everglades Restoration Project or CERP – they just haven’t been adequately funded or implemented as promised. This plan needs to be funded and implemented immediately. This will supply Florida Bay with sufficient freshwater and stop the drastic discharges of water into other areas.

*The Central Everglades Planning Project needs to be fast-tracked.

*The state needs to purchase the land already identified for creating reservoirs to store and help clean the freshwater.

*The state needs to implement strategies to reduce the amount of nutrients in freshwater entering the estuaries.

*It’s not going to be an easy or short-term effort, but if action isn’t taken now, the future of these habitats and fisheries is not bright.

We need you to ACT NOW, before it’s too late!

What You Can Do:

*If you live in the Florida Keys, attend the March 23 Monroe County Commission Meeting, where this item will be a top focus.

*If you don’t live in the Florida Keys, request that this issue is placed on the next Commission meeting agenda for your county and show up at the meeting in force.

*Demand that freshwater flows into Florida Bay are increased, especially during the dry season, and oppose any actions that would reduce this flow.

*Demand that freshwater flows into the Caloosahatchee River and St. Lucie River are greatly reduced.

*Demand that water storage south of Lake Okeechobee is created now, not delayed until 2022.

*Demand that the freshwater flows into Indian River Lagoon are returned to more natural patterns.

*Demand that the freshwater flowing into the estuaries is clean.

*Contact your local, state, and federal elected representatives and tell them to fast-track CERP, purchase the land to create reservoirs to store and clean freshwater, and implement strategies to reduce nutrients and contaminants in the freshwater entering the estuaries.

Find and contact your state Senators and Representatives:
https://www.flsenate.gov/senators/find
http://www.myfloridahouse.gov/Sections/Representatives/myrepresentative.aspx

Contact the Monroe County Board of Commissioners
[email protected]