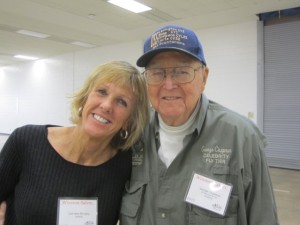 When George “Chappie” Chapman died at the age of 96 at his home in North Carolina, the angling world lost a considerable treasure. A familiar figure on the fly tying circuit, George would dispense good cheer and enthusiasm as he tied his signature poppers and other saltwater specialties. Well into his nineties, George refused to allow physical challenges to spoil a good day on the water.

After a thirty year career in the Navy, George and his wife Mary settled into Woodland Hills, CA where they became a fixture in the local fly fishing scene rarely missing a show, a Club meeting or any opportunity to be of service especially to newcomers to the sport. Their signature old school charm and elegance cast them as parental role models to the next generation. No environmental or educational challenge was too big for George who knew only one way to get things done – full speed ahead into the thick of it. It could be cleaning up Piru Creek, restoring the self-esteem of prisoners newly released from jail or creating a new fly pattern, George’s energy was infectious and irresistible. Angler and celebrity caster Lefty Kreh said, “Chappie was a great friend, not just to me but to all fly fishermen.”

For over twenty years he and Mary played host to the celebrity anglers who spoke on the local Club circuit. No visit was complete without a guided tour of George’s exhaustive angling library. It was impossible to name an edition that he had not already acquired, usually signed and hot off the press. His daughter Catherine remembers when, “My mother and brother Thomas became the best book finders – in the days before Amazon or Google.” Not only a book collector, George was an avid reader with a profound knowledge of the history and relevance of fly fishing – his belief that it was an activity that fostered the better side of the human spirit was at the heart of all he did. His joy was to share that knowledge as freely as possible – George would never be the one to end a fishing discussion. Those lucky enough to have shared a boat or a beat with Chappie soon realized that, while the catching was important, it was only a starting point. Equally at home casting tiny dries on Hot Creek to hurling his monster poppers to schooling dorado in Baja, Chappie was always sure there was a better way to fool the species he loved so much.

Tributes have poured in from his many friends on the professional fly fishing circuit. Renowned fly tier Dave Hughes said, “Like everybody else, I loved Chappie, and like everybody else, I had good reasons: he was a great and lovable character.” East Coaster Joe Humphreys added, “He wasn’t just a great fly tier and fisherman, but a very worldly guy. I will miss my great friend.”

He will be especially missed by Ben Furimsky who invited to Chappie to tie at his shows, “Chappie was one of the nicest and most willing to teach fly tiers we have had at the Fly Fishing Show. He was always excited and passionate about the sport of fly fishing and always loved to share his enthusiasm as well as continue to learn himself.  He was a family member to all of us.”

Set among his books

My friend, loved by all