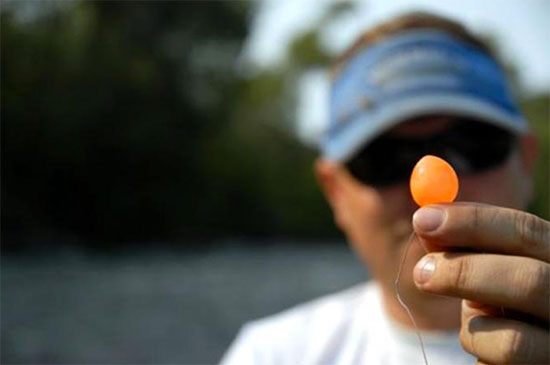 Here’s some inside baseball… the back and forth on bobbers between Louis Cahill and me is all a game. Planned months ago. A media experiment to see how anglers would react. I wore the black hat and fired this opening salvo on fieldandstream.com. Cahill replied with this post on Gink & Gasoline. A bunch of other bloggers climbed on for the ride, and we got an interesting glimpse of sentiment on that matter.

Here’s my response to Cahill’s latest… and feel free to comment if you like… but don’t take anything too seriously.

The feelings of brotherly love (I am from Philly) are quite mutual, Louis.
I respect you as an angler and an artist to the nth degree. A Louis Cahill photograph proudly hangs as a focal point in my family’s living room, and, as a magazine editor, I have bought dozens of your images for covers and spreads, and will continue to do so. You’re a rare talent.

But stick to photography, so you only have to work 1/60th of a second at a time.
Because you just whiffed with your argument.

First of all, what I suggested was NOT a ban, rather, looking at some non-regulated, non-mandated ways that we might find an agreement to keep the bobbers off of certain stretches of river to avoid conflicts. I personally don’t care what you all do fishing wise. I’m just acknowledging that there’s a growing constituency of people who are pissed at the bobber crowd. Rather than digging your heels, and shooting the messenger, maybe you should open your mind (and r-e-a-d the column again, carefully).

set aside a few miles here and there to see how trout react? Curiosity is the essence of fly fishing, after all. What’s the harm in leaving some water “ungroomed?” What are you afraid of? (It strikes me that the most ardent bobber defenders always include the caveat, “I don’t fish bobbers much myself, but”). C’mon, wear it… I do! I bobber fish, all the time. Would you or wouldn’t you be one of the first people to gravitate to a bobberless stretch of the Madison, or the Colorado, or the Delaware? I think you would.

Second, let’s dispel that myth about “matching the underwater hatch,” which is total hogwash. I’ll grant you that trout do indeed spend most of their efforts eating nymphs, and sometimes they just won’t pop to the top. But if you want to tell me that sometimes you just need to match some abundance of bugs that look like purple prince nymphs or hot pink San Juan worms riding 6 feet below the surface when nothing natural is happening elsewhere, I’m going to call bullshit. You can turn over a million rocks in rivers from Maine to California, and you won’t see anything that remotely resembles a purple prince nymph.

Here’s what’s really happening: Trout, by nature, will inhale (ingesting what they like, and ejecting what they don’t) almost anything that floats directly in front of them. That’s true with flies… and leaves, and twigs, and pieces of bird poo, and pretty much anything that hits them in their faces. The Copper John, the world’s best-selling fly, is not a miracle bug because it imitates natural food so well, rather, it’s because it sinks well, and hits trout in their faces.

What the bobber, and split shot, and nymph rig does, is stick flies right in the faces of a trout, and give the angler a 25-50-percent chance (depending on how fast they can react) of sticking those trout in the mouth. You are FORCING the bite! It’s a “driven hunt.” Like having beaters pound the bushes to get pheasants to fly your way. I totally get and agree that sometimes fish are tuned on subsurface bugs, but if you tell me you’re matching the magic hatch six feet down, all the time, I’d say, “C’mon man!” You know better.

What we’re really, truly, talking about (my real beef, which you ask about) is pounding fish. And given that nymphing is deadly effective, and a large percentage of caught-and-released fish die (regardless of how wet you keep them), the real issue is shifting the paradigm for measuring success on a river from the “how many” to simply the “how.” In certain places, we may be killing our sport, and our fish, and our rivers, by being so focused on the “how many.” I’m all about intriguing the “newb” and getting them interested, and the photo they take holding a fat rainbow caught on an nymph rig is, well, a “participation” trophy. Good job. Thanks for coming. Hope to see you again.

But Louis, the truth is, we rarely see them again. For example, by tracking Montana licenses, we realize that over 80 percent of the newbs who go bobbering down many rivers never, ever return. (Why would you, if you paid $500 to do the A River Runs Through It thing, but only stared at a bobber all day?)

And I’m also speaking on behalf of the good guides, who can teach people to fish. Since I ran my column, I’ve heard from many guides, who have said, “right on!” To them, the issue isn’t dry, or wet, or any of that… it’s that there are too many production guides who really don’t know how to fish on the water. Any guide with confidence and skill would eagerly accept the challenge of working some bobber-free water. And again, if the client demands, there should be the bobber option, for most of the other waters available.

I’m also speaking on behalf of the manufacturers, who desperately want to attract newbies to the sport, but realize, for example, that there’s no way in hell they can sell $700-plus rods to people who only fling nymphs and bobbers all day. Would you? I mean, honestly, who the would pay more than $100 for any fly rod if all they’re going to do is sling a bobber and a nymph rig?

Lee Wulff said that trout are entitled to the “sanctuary of deep water.” I purposely didn’t even base this discussion around steelhead, because that isn’t a fair fight. But I have fished with Frank Moore, probably the greatest living fly angler/conservationist on the planet today. Guess how Frank feels about nymphing for steelhead.

The bottom line is that I believe it’s okay for the trout (or steelhead) to win sometimes! That’s real fishing. And I’m not for more rules, nor cracking people on their heads. But I don’t think there’s anything wrong in asking anglers to think broader.

In the post I wrote, I used the skiing/powder analogy, and maybe some didn’t get that. So I’ll use another, more graphic one now. I have a toddler nephew, who’s going through a certain “rite of passage.”

And we say to him, “Hey, you should go to the bathroom like a big boy now.” At which point he sucks his thumb and gets all pissed off, and thinks we’re bad people. But the real factor (whether he realizes it or not) is that the rest of us are going to enjoy his company a lot more when he doesn’t take a grumpy in the middle of a restaurant, so we’re asking him to “evolve” a bit. I suppose he can crap his pants for as long as he wants. And nobody’s going to spank him, and nobody will scold him, and eventually he’ll figure it out.