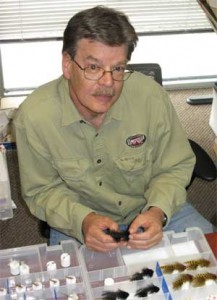 On Tuesday, August 25th, the fly fishing world lost one of its key figures, and one of its most significant influencers over the past few decades. Bruce Olson passed away yesterday in his home in Superior Colorado at the age of 67.

Already an avid fly-fisherman, Olson joined Umpqua Feather Merchants in 1989 as the Inside Sales Rep, and over the next two plus decades held several positions at Umpqua including Customer Services Manager, Sales Manager and New Fly Manager. He played a key role in the development and evolution of Umpqua’s Royalty Signature Fly Designer Program, inevitably influencing innovative fly introductions into the main stream of fly-fishing. In working with hundreds of fly designers, and reviewing thousands of potential fly patterns, Olson applied his knowledge of fishing and fly design to shape trends, drive innovation, and inspire fly tyers to push the envelope in their craft.

“Bruce was as passionate about his job as any person I have ever met. He was honest, intense, funny, creative and brash all at the same time. I penned the name “Il Duce” (the dictator) to him and he loved it! You both loved him and wanted to strangle him at the same time. The end result was that he was always pushing the envelope to get the best out of his fly designers. Love him or hate him you always knew where you stood with Bruce. He wore his feelings right on his shirtsleeves and that is what I admired about him most. I already miss our after hours talks about flies and their attributes to particular fisheries.”
— Henry Cowen, Writer, Guide, Umpqua Signature Fly Designer

In addition to his tireless work with Umpqua’s Signature Designers and invaluable contributions to Umpqua’s sales and marketing efforts, Bruce was a highly sought after source for all types of media and authors. His insights and knowledge of fisheries, fly design and angling in general often appeared in trade magazines and other publications. In 2012, Fly Tyer Magazine bestowed a Lifetime Achievement Award to Olson for his many contributions to fly tying and fly-fishing.

“Clearly, the mold was broken when Bruce was created. He had the rare gift of knowing what minor tweaks an average fly needed to make it a major hit, and in his words, he could “smell money” when it came to new flies that would light up a retailers cash register. Bruce loved Umpqua and loved flies and even a complete stranger could sense that passion within minutes of meeting him. Bruce was one of a kind and won’t easily be forgotten!”

Olson undeniably played an important role in the sport’s and the industry’s evolution. Bruce will be missed by many people in the fly-fishing community.

ABOUT UMPQUA FEATHER MERCHANTS—
Since being founded in Glide, Oregon by the late Dennis Black in 1972, Umpqua has been an innovator in the fly-fishing industry. In creating the first-ever Royalty Signature Fly Tyer Program, Umpqua altered the course of the industry by making flies more readily available and affordable to anglers everywhere, while at the same time enabling designers to receive recognition and compensation for their creativity. Today, Umpqua has nearly 200 Royalty Signature Designers and has introduced hundreds of revolutionary, game changing fly patterns throughout the years. Umpqua’s innovations extend far beyond just flies, and include award-winning fly boxes, packs and vests; industry unique, ultra-effective tapers; and a comprehensive assortment of high quality streamside accessories, hooks, fly-tying tying materials, tools and more.