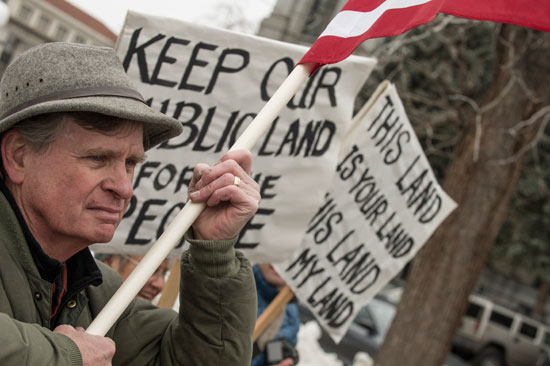 Sportsmen and -women from across Colorado converged on the steps of the Colorado State Capitol this afternoon to protest efforts by members of the Colorado legislature to take control of federally managed public lands located within the state’s borders.

“Keep public lands in public hands,” was the rallying cry of the hunters and anglers, who are strongly opposed to efforts to transfer to state ownership federal public lands in Colorado. A bill has been introduced in the Colorado General Assembly that would give the state concurrent jurisdiction over some federally managed public lands; subsequent proposals aimed at undermining the federal public lands system are expected.

“Public lands are 100 percent essential to Colorado recreation of all kinds and should never be surrendered to the political whims of state politics and special interests,” said Kent Ingram, president of Colorado Wildlife Federation. “In the case of Colorado sportsmen and sportswomen, these public lands may also represent the only real guarantee we have in hunting and fishing opportunity.”

A bipartisan poll by Colorado College found that more than 80 percent of Coloradans cited the ability to be near and recreate on public lands as a significant factor for living in the West, with 72 percent saying that public lands belong to all Americans, not individual states.

“Nearly three quarters of Western sportsmen rely on federally managed public lands for their hunting access, “said Nick Payne, Colorado field representative for the Theodore Roosevelt Conservation Partnership. “Colorado has over 24 million acres of federal public lands and with that some of the finest hunting, fishing and outdoor recreation in the world. No reasonable sportsman, after thorough examination, would support turning public lands over to the states. Public land transfer could result in one likely outcome: the sale of public lands to the highest bidder and the loss of access to millions of acres of prime hunting and fishing lands.”

The enormous costs associated with fighting wildfires, maintaining roads and trails, treating noxious weeds and conducting habitat restoration on these lands carry a high price tag and would tax the abilities and budgets of Western states to manage them. Consequently, a transfer scenario could result in the sale of these lands to private interests and a permanent loss of access to sportsmen and other members of the public in perpetuity.

“As private hunting access increasingly becomes limited to the wealthy and well-connected, public land remains the only safeguard that, no matter what profession you choose or what family you marry into, you will always have a place to stalk backcountry bulls or decoy plump northern mallards,” said Tim Brass, southern Rockies coordinator for Backcountry Hunters and Anglers. “There’s simply no other way to spin it. A federal public land transfer would lead to a loss of public access for sportsmen throughout our country. It’s time for politicians to drop this unpopular rhetoric and work toward real public land management solutions.”

Speakers at the Denver event, which follows similar sportsmen rallies in Boise, Idaho, and Santa Fe, New Mexico, include sportsmen, business owners and military veterans. Corinne Doctor of Lafayette, owner of Rep Your Water; Eric Lynn of Colorado Springs, a veteran and owner of Mountain Ridge Gear; David Leinweber, also from Colorado Springs and owner of Angler’s Covey; and Kirk Deeter of Pine, Field & Stream editor at large, joined the hundreds gathered at the Capitol to raise their voices in support of the nation’s federal public lands.

“Every major river in the west begins in or flows through public lands,” said Aaron Kindle, Colorado field coordinator for Trout Unlimited. “So for anglers, public lands are the holy grail. Attempts to send these lands to cash-strapped states that will have no choice but to sell out when the ledger becomes off-balance – that really raises a red flag for anglers. The access and opportunities these lands provide are the birthright of all Americans. It should stay that way forever.”

Backcountry Hunters & Anglers is the sportsmen’s voice for our wild public lands, waters and wildlife