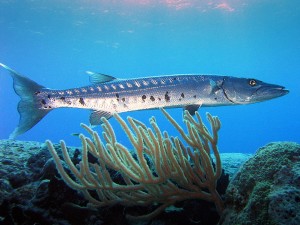 Florida Fish & Wildlife Conservation Commission (FWC) data shows commercial catch of barracuda in the Florida Keys has increased fivefold in three years, from 10,000 pounds in 2011 to more than 50,000 in 2013. That year, Florida Keys waters accounted for 67 percent of the state’s commercial barracuda catch.

Last year, when fishing guides and others began to notice that barracuda were suddenly not as plentiful as they had been in the Florida Keys, one local group decided to try to find out why.

Members of Lower Keys Guides Association, comprised of local fishing guides and anglers from around the world, are dedicated to sustainable fisheries and maintaining the historic tradition of backcountry fishing in the Florida Keys. The group initiated a Save the Barracuda campaign and online petition that asked FWC commissioners to consider the status of the barracuda.

In response to concerns expressed by the Keys fishing community, the FWC is hosting several workshops where staff will share their information on the current status and future of the barracuda while hearing comments from anglers and fishing guides.

The great barracuda is a predator fish, and though it rarely attacks humans, even a small one can provide an adrenaline rush when encountered for the first time by a novice snorkeler, diver or fisherman.

“Barracuda is prized as a strong fighter in sport fishing and is a valuable catch & release fish,” says John O’Hearn, president of the LKGA. “But since it is an unregulated species, considered a food and bait fish, it has no protection for size or numbers being harvested.”

Although barracuda is not known for its appeal on Keys menus, it is considered a delicacy by many cultures in the Caribbean, where the species has been nearly decimated. Are the diminishing number of barracuda in the Keys related to the situation in the Caribbean?

Barracuda currently brings at least $1 a pound at market and retails for $15 a pound on one online fish market. Some believe the commercial demand for barracuda has already reduced their numbers in the Florida Keys.

Commercial fishermen, most coming down from the mainland, have found a market for the barracuda in the many Caribbean immigrants who have settled in South Florida. Others would argue that loss of habitat is usually the reason for species loss. The truth is, no one knows for sure why the fish is becoming more scarce.

Most Floridians know that one reason barracuda is not typically eaten in the Keys is that the fish carries ciguatera, a toxin commonly found in reef fish.

According to the Center for Disease Control (CDC), ciguatera is an illness caused by eating fish that contain toxins produced by a marine microalgae. People who have ciguatera may experience nausea, vomiting, and neurologic symptoms such as tingling fingers or toes. They also may find that cold things feel hot and hot things feel cold. Ciguatera has no cure. Symptoms usually go away in days or weeks but can last for years.

But visitflorida.com reports, “small barracuda are fun to catch and good to eat.” The un-named author of the article says he’s eaten thousands of barracuda and never been sick, but he only eats small ones, as the big ones are known to be more toxic.

What their diminishing numbers could mean

Whether or not you agree, if this is a common way of considering the edibility of barracuda, eating the young could be attributing to their recent decline.

Scientific data shows we are losing species at an unprecedented speed and the loss is accelerating daily. A University of Michigan study estimates the projected rate of loss is 27,000 species per year, and three will become extinct during this hour. Extrapolated to the year 2020, roughly 20 percent of remaining species will disappear.

Given these alarming predictions, it’s reasonable to wonder if the thrill of seeing a razor-toothed barracuda lurking in our waters could become an experience lost to future generations.

If all goes well for the toothy predators and those who want to protect them, the FWC workshops will result in regulations designed to protect the species and keep it around for the enjoyment of all, now and in the future.

Three upcoming workshops on the diminishing number of barracuda in the Florida Keys provide the public opportunity to share with FWC staff anecdotal information about their numbers, fisheries and habitat.

Lower Keys Guides Association’s campaign to Save the Barracuda has helped bring this concern to the attention of the FWC. Help is now needed to convince FWC of the importance of this species to our fisheries and to recreational fishermen. The workshops are open to the public.

More information about how to participate in the webinar or conference call will be available on FWC website prior to the webinar date: http://www.myfwc.com/fishing/saltwater/rulemaking/workshops/.