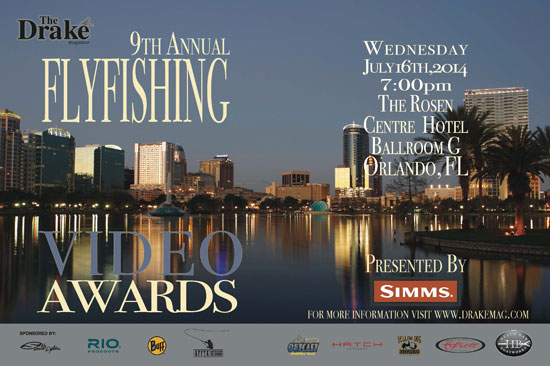 The Drake magazine’s Flyfishing Video Awards have, over the years, become the premier “event within the event” at IFTD.  I know some people who go to the show just to go to the Drake Video Awards, and if you’re in town and don’t show up for this, you’re going to be conspicuously absent.

Another reason you should check this year’s show out (7 p.m., Rosen Centre Hotel, Ballroom G) Wednesday the 16th, is because Drake publisher Tom Bie says he is more stoked on this lineup than any in the event’s previous nine years… and that’s actually saying a helluva lot.

Says Bie: “The thing is, in the nine years I’ve been putting this show together, I’ve never been more excited about the content of the awards program. Part of this is just the result of it being an especially good year for films (DamNation, Mending the Line, GeoBass, Blood Knot, Waypoints…) But also, I’m excited about the return of companies like Orvis and Patagonia to IFTD.”

Note, the time has been moved up an hour and a half, from 8:30 to 7 p.m., so people don’t have to wait almost three hours for the awards show to start after an already long day. Bie also has invested a lot in the production, especially in the areas of a sound system and big screen. He has the Howler Brothers band (Wrinkle Neck Mule) playing, starting at 7 p.m.  There are drink tickets from Hells Bay for the first 200 people in the door (and that’s for ANY drink at the bar, not just a beer.)  They have got sunglasses from Smith, line from RIO, 100 Buffs, all to be given away.

As Bie recently pointed out, this is a showcase for so much of what our sport represents—the history, the humor, the sight of a jumping tarpon or sipping trout, the conservation.  It would be great for some of our conventional tackle brethren to see and understand this.

Bie concludes: “To be clear: This isn’t an F3T show. Or an IF4 show. I have several films from both, plus others, like DamNation and Wild Reverence, that were in neither. It’s the best of the best. And I’m proud of it.”