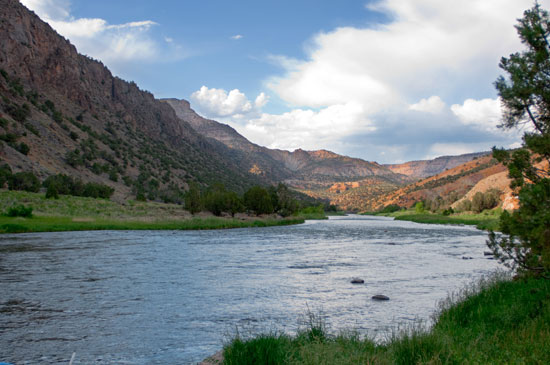 Editor:
We just finished reading the headline of an article, “Blue Mesa Reservoir unlikely to fill this summer,” which appeared in June 6’s Crested Butte News. In this article, it discusses the flows set for protection of endangered fish (which to the best of several folks’ research was last evaluated in 1993). I am all for the preservation of these native fish to the best of our ability in a severely altered system. However, there were a few facts that were missed in what is actually happening with our flows and water storage. This year’s plan does indeed call for 10 days of flow at 14,350 cubic feet per second (cfs) AND 40 days at 8,072 cfs. But the glaring omission was that this is to be at the Whitewater Gauging Station near Grand Junction. So the contributors to these flows are the Uncompahgre River, the North Fork of the Gunnison and the Gunnison River.

The reason this is important is because the peak flows are the cumulative total of these three drainages and the Bureau of Reclamation missed the peak flows of the North Fork and the Uncompahgre River, which typically peak in May. Had they scheduled releases from the Gunnison (Blue Mesa) earlier to align with the other peak flows, the maximum discharge needed to maintain the flows at Whitewater would not be as high from the Aspinall Unit. These would also match the more historic peak flows that would be better for the fish and river users. The 2012 Aspinall Environmental Impact Statement (EIS), which took eight years to determine, sought the best way to manage the water flows through the Black Canyon taking into consideration: the Endangered Species Act, the agricultural water users, the hydro-electric dams, and recreational use both above and below the dams. By federal law, the Bureau of Reclamation is required to attempt to meet these flows as stated by the Record of Decision (ROD); however, there are no consequences for not meeting them. The results of this are:

1. Wasted water storage — They missed the peak runoff from the North Fork and the Uncompahgre that should have been used to contribute to their minimum flow requirements. They were forced to waste water stored in Blue Mesa by sending it downstream due to these missed flows rather than conserving it. Their estimated inflow to Blue Mesa due to snowpack this year would have filled the reservoir more than one-and-a-half times its capacity. Due to mismanagement or miscalculation, it is not expected to fill this year.

2. Wasted electricity generation — Every drop of water that runs over the dam rather than through the turbine is wasted electricity. The maximum amount of water that can run through the turbine at Crystal Reservoir is 4,350 cfs, 1,000 of which is redirected to Montrose through the Gunnison Tunnel for agriculture and is not used to contribute to the ROD minimum flow requirements. Their new plan is to run a peak flow in the canyon of 9,600 cfs for 11 days, which is equivalent to around 12 percent of Blue Mesa’s capacity. The flushing flows duration from the ramp up to the ramp down will last a total of 62 days.

3. Fishing at these flows is non existent — The Gunnison River is world renowned for its stonefly hatch that happens in June each year. The month of June makes up more than 50 percent of the outfitters’ annual revenue and creates more recreational use than any other time of the year. Commercial fishing trips alone generate more than $1.2 million to the local economy. Yet, Black Canyon Angler’s were forced to cancel all of their June reservations, accounting for a loss of more than 50 percent of their annual business.

4. The Endangered Species Act — There is no data showing that the timing of the peak flows is either a benefit or a detriment to the endangered fish. However, the U.S. Fish and Wildlife Service only approved the timing of the flushing flows within the ROD between May 10 and June 1 to match the peak flow of the North Fork of the Gunnison River. Therefore, it seems unnecessary to run flushing flows during the months of June and July.

5. In regard to the agricultural needs — The ROD and EIS minimize the harmful impacts of agriculture on the health of the endangered species and aquatic life. The proposed base flow starting at the end of July will be around 500 cfs, drought-year equivalent flows. Therefore, such low base flows will not dilute harmful by products of farming (primarily flood irrigation) and may have more negative impacts on the endangered species than flushing flows that benefit endangered species. Drought flow levels of 500 cfs will have interesting results when water is needed for agriculture later in the dry summer months.