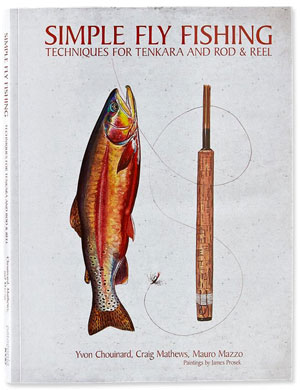 Does anyone still think that tenkara is a fad?  If you do, you might want to take note of what is happening at Patagonia.  Having only recently launched a tenkara kit (rods produced by Temple Fork Outfitters), as well as a book by the dream team of Yvon Chouinard, Craig Matthews, Mauro Mazzo, James Prosek (illustrator) and Russell Chatham (foreword) called Simple Fly Fishing, the company has already moved thousands of units.

Perhaps more importantly, because tenkara is exactly that (simple), it is an ideal teaching and learning tool.  Patagonia reports that through its tenkara clinics at its retail locations, many “newbies” to fly fishing are making first contact with the sport.

-Completed over 30 clinics at its retail stores across the United States. Approximately 1400 people attended.  They have waiting lists for the next clinics.

-Noted that over half of the people attending clinics had never fly fished. A good percentage were women and kids.

–The Simple Fly Fishing book and Tenkara rod packages have brought about 900 brand new anglers to the sport, in less than two months.

-Posted Patagonia fishing dealers’ info on car windows (and handed out cards with dealers’ info.) which directed customers to their local fly shop to purchase the rest of their gear.

-Started this program with the intent of bringing new people into the sport to create the next new level of stewardship for the resources.

Will tenkara become to fly fishing what snowboarding became to alpine skiing?  Probably not.  But it is proving to be a means of growing the sport, and protecting resources that make that sport possible in the first place.  Kudos to Patagonia for pushing the agenda.  Hopefully you’re on board as well.

Look for a detailed review of Simple Fly Fishing in the next print issue of Angling Trade.