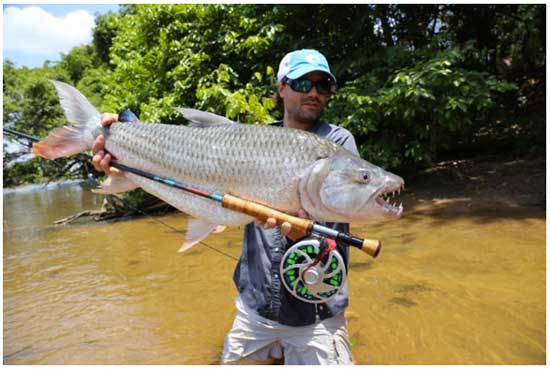 Nautilus Reels today announced that professional angler and co-owner of Abaco Lodge and Bair’s Lodge in the Bahamas, Oliver White, has been added to the company’s pro staff.

“We are thrilled to have a conservationist and angler of Oliver’s caliber and renown join our team,” said Kristen Mustad, Nautilus’ president. “He is widely regarded as one of the young stars in our industry, and I predict that he will be a key player in widening the allure and appeal of fly fishing to the masses in the years to come. His knowledge and passion spans far beyond fly fishing and conservation. He is a sharp business man and world traveler. He is also one of those rare individuals who can genuinely connect with people of any age and any background.”

A frequent subject of media coverage, White, 34, has guided professionally for more than 10 years, and routinely fishes and leads clients on angling trips to Russia, Tierra del Fuego, Iceland, Montana, Louisiana, and Guyana, as well as other premier angling destinations. He was recently featured in the film Waypoints chasing giant payara in Venezuela. In 2012 he was among a pioneering group of anglers who traveled deep into Guyana on a mission to be the first to catch the primordial arapaima on fly tackle. That adventure, sponsored by Costa Sunglasses, was documented in the Sundance award-winning film, Jungle Fish.

“It’s a call every professional angler wants to get,” White said of learning he had become a Nautilus pro staffer. “Their product is the reel of choice in my circle. I have been a fan for a long time. I would use their reels even without this designation.”

About Nautilus Reels:
Nautilus Reels produces an award winning line of reels from their headquarters in Miami, Florida. Nautilus is on the forefront of reel innovation and maintains a tradition of experience and excellence while continuously redefining performance. For more information about Nautilus Reels, please visit their website and follow Nautilus on Instagram, Facebook and Twitter.