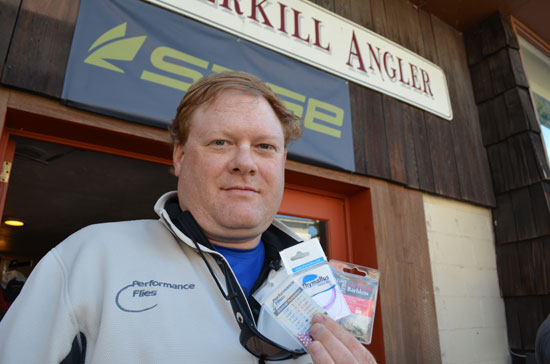 Kevin Compton of Cleveland, seen here during a fly-fishing tournament in Roscoe, New York in October 2013, specializes in fly-tying supplies and terminal tackle for competition anglers — and for recreational anglers who incorporate competition tackle and tactics in their own fishing. Photo Morgan Lyle

In the next print issue of Angling Trade, we’ll be running a story by Morgan Lyle on how some manufacturers and shops are tapping into the growing potential of “competitive” fly fishing—special rods, lines and flies that conform to tournament standards.  The “Pro Fly Angling Tour” is set to start in 2014, and some anglers who never “compete” at all are drawn to specialty performance gear.

That said, there’s a pretty vocal contingent in the fly-fishing world who feel that competition and fly fishing mix about as well as oil and water.

We want to ask you, the people who sell this sport, what you think.  Please click an answer below that best describes your position on the matter.