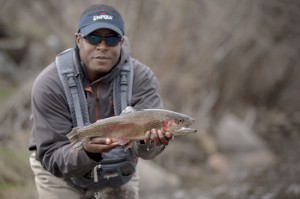 While he may be known to the public from his seven episodes as a contestant on Animal Planet’s fishing reality TV show “Top Hooker”, Dzifa Glymin is an avid fly fisherman, a fierce competitor, and talented fly tyer. Glymin, who has lived in Colorado since 1980, has now become an Umpqua Signature Fly Designer as well.

“I have fished Umpqua leaders, tippet, hooks, and flies for as long as I can remember. To be a part of the Umpqua Fly Designer team is a dream come true. I am looking forward to the future, andworking with Umpqua to bring new and effective ideas and patterns to anglers everywhere!”
—Dzifa Glymin

Glymin, whose KGB pattern in black and tan will now be in Umpqua’s 2015 line up, has been fly fishing since age 10 and tying since 16. His passion for the sportearned him a Colorado Master Angler Award in 2008, and led him to launch  ColoradoFlyFisherman.com.

In 2010 Glymin was introduced to FIPS-MOUCHE, andcompetitive fly-fishing, and he has competed multiple regional and Team USA National competitions. Glymin is a member of the Colorado Fly Fishing Team, and has his goals set on becoming a member of Team USA and fishing in a world championship. Glymin is a lifetime member of Trout Unlimited, has served on the Denver Trout Unlimited Board of Directors, and has donated his time to both DTU and Project Healing Waters.

“Dzifa is a truly wonderful addition to our team of talented Signature Fly Designers. He brings a spectacular gift for creating innovative new patterns, along with an impressive angling resume and an irrefutable love for fly-fishing.”
—Riley Cotter, Sales Manager, Umpqua Feather Merchants