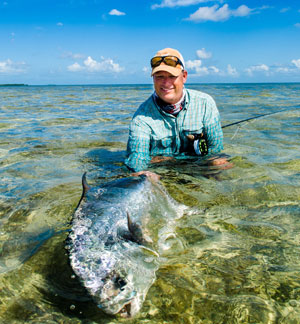 Bruce Chard has been guiding for two decades and is considered by many the premier Florida Keys guide. If you’re lucky enough to get a day on the water with him, you will immediately be drawn to his unbridled enthusiasm and true passion for the sport of fly fishing. Bruce is one of the nicest people you will ever meet…seriously! Even after missing an easy shot on the only tarpon of the day, Bruce will still make you feel like a million bucks. This is not an easy thing to do, especially after he has been pulling the flats boat for eight straight hours into a headwind to get you that one shot! Bruce has a special gift in connecting with fly fishers of all ages and skill levels. Just spend a couple of minutes around Bruce and you quickly realize that fly fishing is not just his job, it’s his passion. As one of the most sought after guides on the planet, Bruce has been featured on the cover of more saltwater fly fishing magazines than any other Keys guide. Still in his thirties, Bruce has accomplished a lifetime of successes and has greatly contributed to the development of flats fishing techniques, fly patterns and equipment. Bruce truly embodies the soul of fly fishing!

“I’m incredibly excited to be a part of the Winston tradition! The Boron III SX sticks have always been a favorite of mine for tough, windy days on the deck of the boat, and I love the Boron III X series for quieter days stalking bones and permit on the flats. It really is a dream to be working with Winston and I look forward to supporting their efforts in years to come. This is going to be a fun ride!”