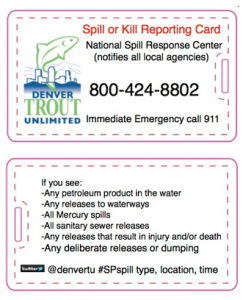 DTU members have distributed 1,500 cards in the Denver Area and other Colorado Chapters have ordered over 3,000 cards. The chapter believes other chapters, fly shops, and conservation groups can use the cards to rescue rivers and start conversation about river conservation nationwide.

“The hardest thing for me during this crisis, “said Trevor ” was finding out who to call. I was standing on the bank of the river, scratching phone numbers in the mud, as I called fly fishing buddies for ideas. I suggested to the Denver Chapter that we should make up an emergency response card that fly fishers or anyone spending a lot of time along the river could use to make a call if they saw something wrong in the water.”

With the help of Curtis Kimbel the Environmental Protection Agency Regional Emergency Response manager and the first on the scene to verify the problem, a plastic wallet sized “Spill or Kill Reporting Card” was developed and produced in less than 20 days.

“This card has everything I needed. One number, 800-424-8802, right on the front, a list of what to look for on the back and if I have a twitter connection, the hashtag #SPspill, that will get the attention of other TU members @denvertu and keep them up to speed on what is going on,”  said Trevor.

Curtis Kimble added, “Often a tanker spill on a back country road or a fish kill goes 4 days before we find out. By that time major damage has been done. With this card in hand, a trout fisher on the stream can give us a 4 day head start and possibly prevent the oil from even reaching the creek. We have the emergency response teams ready. We just need to know where they are needed as rapidly as possible.”

Todd Fehr, former DTU president pointed out, “This is also good for the company responsible for the spill or kill. Early response that keeps damage and clean up to a minimum also keeps costs and fines to a minimum. It is truly a win-win situation for those that love and use the river, the company, and of course the trout, carp, bass and aquatic insect life in the river.

The 800-424-8802 number on the front of the card, according to Curtis Kimbel, is the National Response Center for pollution emergencies and is actually a 24-hour Nation-Wide hotline run by the Coast Guard. They will notify all relevant federal, state, and local agencies immediately and call back the reporting party within 30 minutes. Curtis emphasized that if there is an immediate life or injury threatening emergency 911 should be called first. This is clearly stated on the front of the card.

Cory Stansbury, current DTU President likes the way this card can open up conversations about river and cold water conservation. “No one ever refuses the gift of this card and everyone thinks it is a good idea to save rivers. It is then just a small step to get them interested in joining our chapter or becoming involved in other conservation efforts, like catch and release, river bank restoration, the 9/7/13 Carp Slam Fund Raiser for the Denver South Platte River, or Trout in the Classroom.”

The card can even be an opening token in defusing dangerous encounters on the stream with badly behaving river users.  “Do you have one of these cards?”  the card giver might say. “When you see something that is wrong with the water this is an 800 number to call. It’s run by the Coast Guard who will dispatch the right kind of response to handle it quickly before it cause more damage.” After a few moments, you’ve made a compatriot in river conservation. Then you can discuss who will fish the next upstream hole or pack out the empties.

All the info and proofs needed are on the DTU website at this link:
http://www.denvertu.org/home/order-spill-or-kill-cards/

Using cut and past on the front or back of the proof, organizations change can just slap in their logo in place of DTU’s and change the #hashtag  and @contact on the back.  If they use the DTU referral code RP1NS9KMT at www.printingforless.com they’ll get $50 off their first order and DTU gets a credit to print and handout more of these cards.