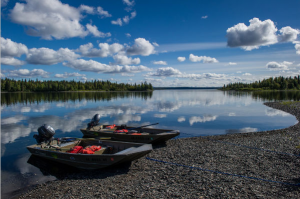 Trout Unlimited’s Save Bristol Bay campaign and the Sportman’s Alliance for Alaska shared big news in late April:  The American public has until May 31st to submit comments to the EPA to protect Bristol Bay from the proposed Pebble Mine.

Under the Clean Water Act, the EPA may call for a series of public hearings and scientific assessments to identify and estimate risks to waterways and thereby protect critical fish spawning and wildlife habitat.  In April, the EPA released a revised Watershed Assessment, outlining alarming outcomes should the Pebble Mine go through as proposed.  The impacts would be salient at broad ecological, cultural and economic scales.  At a quick glance, the assessment noted the following:

Take action and win a trip to the renowned Crystal Creek Lodge
In the midst of this on-going battle over one of our nation’s finest salmon fisheries, the comment period is a powerful tool to protect the interests of Alaskans and anglers from around the globe.  AFFTA encourages all members to take a moment to learn about this critical issue and to submit a comment to the EPA.  Click here to submit TU’s template letter in a matter of seconds.  Once you submit, share Bristol Bay’s Facebook announcement encouraging friends to comment and you will be entered to win a trip for two!  TU and Sportman’s Alliance for Alaska website materials are yours to share with potential advocates, so please spread the word via Facebook, email, company websites and blogs!