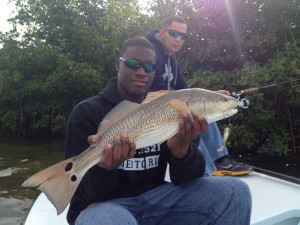 Over the past decade the husband and wife owners of Hell’s Bay Boatworks, along with their staff and pro team have shown their passion for community and conservation projects, giving back to fishing, while supporting non-profits valuing the longevity of the sport. Their creditability of caring continues to rise with still another mission to their long list.

“Wendi Peterson met a lady at a boat show with a bass fishing organization taking soldiers fishing,” said Hell’s Bay Director of Sales & Marketing Capt. Todd Fuller. “There are several of these like Project Healing Waters where in Bradenton we recently took 13 wounded veterans saltwater fly fishing, some for the first time. It was suggested we also consider active military personnel. It didn’t take long for she and husband Chris to agree,” said Fuller. “We all loved the idea proposing a fishing trip to officials at Patrick Air Force Base in nearby Melbourne, pairing over a dozen airmen with seven of our Hell’s Bay pros and their skiffs. They accepted.”

“It was a very successful outing giving the airmen a chance to fish and explore the local resources right in their backyard,” said a smiling Fuller. “Everyone, from novice to advanced angler, caught plenty of fish. We finished with a barbecue lunch and the airmen swapping lots of fishing stories. Our pro team members probably enjoyed it as much as the airmen.

“With much pride and honor, we’ve kicked off the Hell’s Bay Boatworks Military Appreciation Initiative, one we feel strongly about. And we give a special thanks to Brig. Gen. Anthony J. Cotton, commander, 45th Space Wing, and the staff at Patrick for making this first event a great success letting us show our appreciation for all they do to protect our freedom.”

“We certainly want to express our gratitude to everyone who helped put this together,” said Gen. Cotton. “Anything we can do to give a helping hand for our wounded warriors or our airmen here at the 45th is a great thing, and this is just another example of the great community we have here on the Space Coast. It’s all about people helping people; it always has been.”

“We’ll start it on a monthly basis at Patrick by taking two airmen fishing with one of Hell’s Bay’s pro staffers,” Fuller added. ”The base will have an internal process for the monthly selection of the airmen. We expect this initiative will set the stage for other events expanding it little by little as the word grows in coastal areas of other bases.

A decade of giving back
Like Hell’s Bay’s Military Appreciation Initiative, the Peterson’s have long been known for their companies’ special programs such as locating and removing abandoned inshore ghost crab traps and loan of its aerated tank for the safe release of fish in many fishing tournaments. Hell’s Bay is also actively involved with the IGFA, CCA, Bonefish & Tarpon Trust, Guy Harvey Ocean Foundation, Redbone tournaments for CF cure research, Univ. of Fla. marine projects, and Herman Lucerne Memorial Backcountry Championship benefiting Everglades Natl. Park.

Hell’s Bay is located in Titusville, Fla., at 1520 Chaffee Drive. For upcoming special events or to view the model lineups’ many features and benefits visit hellsbayboatworks.com . Or contact Todd Fuller via e-mail at [email protected] or phone 321-383-8223.