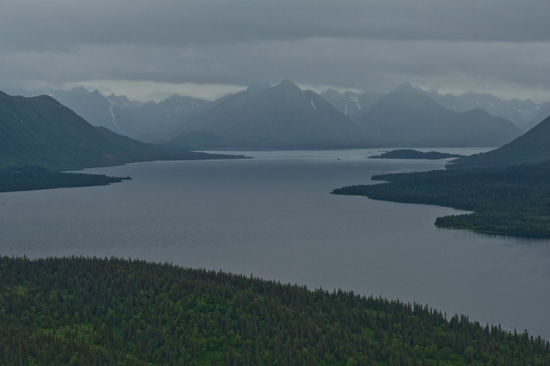 A national campaign to stop the controversial Pebble Mine in Alaska’s Bristol Bay region is the top conservation priority for The Orvis Company, Inc., said CEO Perk Perkins and Vice Chairman David Perkins as they announced the company’s 2013 Customer Matching Grants for Conservation. Long known as a leading corporate steward of the environment, Orvis commits 5% of its pre-tax profits to protecting nature each year. Its annual Customer Matching Grants are the cornerstone of the company’s philanthropic program, which this year will contribute more than $1 million in cash and in-kind donations to protect nature.

“The Pebble Mine, if developed, would certainly become one of the worst environmental risks on the planet and would permanently scar if not destroy one of America’s most majestic natural resources,” said CEO Perk Perkins. “We intend to lend our full weight, along with our partners in the sport and commercial fishing industry and leading scientific organizations, to the campaign led by Trout Unlimited to convince the EPA, Congress and the Administration in Washington to stop the Pebble Mine.”

In addition to its financial support, Orvis will promote the campaign in its catalogs, website, stores and social media, to enlist the support of its customers to champion the cause, donate, and support political action in Washington, DC.

If developed, the Pebble Mine would be the world’s largest open pit gold and copper mine, gouging a hole more than 3 miles wide and spawning an operation that would demand the infrastructure and energy equal to run the city of Anchorage, AK. As proposed, earthen dams that would need to remain forever intact would suspend more than 10 billion tons of mine waste above the pristine Bristol Bay, a region that averages one 5.0 earthquake per year. Bristol Bay is home to the world’s largest sockeye salmon run which will be degraded or destroyed in the event of a breach. The salmon run sustains the entire ecosystem that is home to more than 138 iconic species including grizzly and black bears, bald eagles, and river otter. They are also the foundation of the region’s native salmon culture, commercial and sport-fishing economy, and provide a significant share of the world’s protein.

A long-awaited study by the EPA is due this year, which those close to the issue expect would justify the White House taking action under the Clean Water Act of 1972, to condemn the proposed Pebble Mine and protect Bristol Bay. “Now is the time to let our voices be heard in Washington. We cannot allow this to become an environmental disaster-in-waiting,” said Orvis Vice Chairman David Perkins. “We invite our customers and the general public to join us with their financial support and sign a petition to the President via our website at orvis.com/pebblemine.”

Orvis will match its customers’ donations to the Stop Pebble Mine campaign, dollar for dollar up to $50,000 in 2013. This $100,000 commitment is Orvis’s top priority, but just a portion of its more than $1 million pledge to the environment and related causes this year. Orvis has awarded another $90,000 Matching Grant for the second year to continue the Orvis – Trout Unlimited “1,000 Miles Campaign” to restore up to 1,000 miles of fishable streams by repairing or replacing damaged culverts and other obstructions in streams located throughout the U.S. Orvis has also awarded grants to support canine well-being, with a $60,000 pledge to Petfinder Foundation to support dog rescue shelters and adoptions, as well as its first-ever matching grant in the UK to the Battersea Shelter Working Dogs Program.

“I am always gratified, but never surprised by the willingness of our customers to contribute meaningfully to our conservation efforts,” said David Perkins. “Together over the years we have achieved some remarkable results, and that’s why our commitment of 5% of pre-tax profits is not only a commitment to protect nature, but is a commitment to our customers. Each year, we carefully select partners whose programs meet our common goals, and we highly commend these outstanding programs to our customers and to the general public, through these matching grants and the year-long, multi-channel promotional campaigns we have committed to them.”

Over the past 25 years, Orvis has raised and donated in excess of $14 million to a wide variety of conservation programs, from Kodiak Island, Alaska to the Florida Everglades; from the Mountain Gorillas of Rwanda to the great Coral Triangle of the South Pacific; and in dozens of vital fisheries and wildlife habitats throughout North America and the world. Details of this and past year’s initiatives can be seen at www.orvis.com/commitment.

About The Orvis Company
Founded in 1856, Orvis pioneered the mail order industry in the United States. It now operates multiple catalog titles, three websites, more than 80 retail stores in the U.S. and the U.K. including its Flagship Store in Manchester, Vermont, and serves a network of over 400 authorized dealers worldwide. The oldest continuously operated catalog company in the country, Orvis provides authentic products, knowledge and experiences that define and enhance the distinctive country lifestyle and sporting traditions, with unsurpassed innovation and expertise in fly-fishing and wingshooting. A leading corporate steward for the environment, Orvis contributes 5% of pre-tax profits to protect nature each year. The company’s international headquarters for its mail order, e-commerce, retail, and wholesale businesses are in Manchester, Vermont. Learn more at www.orvis.com.