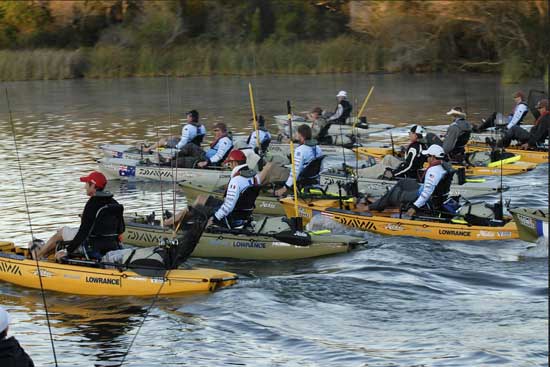 Australia is not just about kangaroos, shrimp on the barbie or beer – it is also very much about world-class fishing.  Anglers from across the globe will discover this fact as they converge on the Bemm and Snowy Rivers in Victoria, Australia, October 30-November 3, for the third annual Hobie Fishing World Championship presented by Daiwa and hosted by Hobie Cat® Australasia.  All countries will compete for the chance to crown one of their own as World Champion.

“The goal of the event is to continue building a platform for Hobie fishing competition in an environment embracing a common passion for fishing.  It’s also about building international camaraderie that overrides language and cultural barriers,” commented Doug Skidmore, president of Hobie Cat Company.

Anglers will be in search of the feisty black bream; pound for pound one of Australia’s most challenging game fish. Anglers will compete in identically rigged Hobie Mirage Pro Angler 14’s propelled by Hobie’s patented MirageDrive system and fitted with Lowrance electronics and Ram® Mounting Systems.

Live weigh-ins will take place on each of the three days of competition with anglers weighing three fish per day. This is tough and challenging water for fishing. Defending champions Scotty Baker (2011) and Marty Mood (2012) will have to be at their best game if they want to take another crown.  Can they do it or is there another champion on the sidelines?  November 3 will tell the story.

Qualifying opportunities will be announced in the coming weeks.

For the most up-to-date information between now and the Championship, click on http://Hobiefishingworlds.com