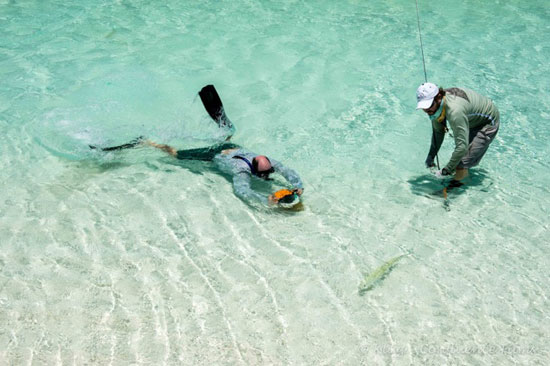 Confluence Films, the creators of the popular fly fishing films Drift, Rise, and Connect, announced recently that they have officially begun production on their fourth feature-length film, Waypoints. This latest film project is once again a multi-segment collection of individual stories shot around the world, and includes both saltwater and freshwater locations.

Filming began earlier this month on St. Brandon’s Atoll in the Indian Ocean, a remote and uninhabited saltwater destination located 350 miles north of the island of Mauritius. Additional segments will include trophy payara in the jungles of Venezuela, Golden Mahseer in India and Nepal, trout in Chile, and spring steelhead in Southeast Alaska. As with Drift, Rise and Connect, the new film project is the result of a partnership by Director and Cinematographer Chris Patterson of Warren Miller Entertainment and Executive Producer and Writer Jim Klug of Yellow Dog Flyfishing Adventures. Anglers featured in the new film include Dan “Rooster” Leavens, Oliver White, Chris Yrazabal, Greg Bricker, Brett Seng, Jeff Currier, Travis Peterson, and the guides of Flycastaway of South Africa.

“St. Brandon’s was a fitting location to begin production on this new film,” says Chris Patterson, the films Director/Cinematographer. “It took four days of solid travel just to get there, which is appropriate for a film project that focuses on fishing-related travel, wild destinations, and the exotic, out-of-the-way places that fly fishing can take us. As with our previous projects, Jim and I are focused on making a movie with a large-scale, exotic and global feel – a combination of saltwater and freshwater destinations that feature different species, great stories and unique characters. I think that viewers can expect some compelling profiles of both destinations and people, with great fishing footage both above and below the water.”

Writer and producer Jim Klug is equally as excited buy xanax without rx about the new project. “Connect – out most recent project – was a fun film to make. It was very well received, and to date it is the most successful project that we’ve created. After a year off, it’s nice to be filming again and great to be back out there with the cameras rolling. This new film is of course going to feature plenty of great fishing action, but beyond that, will introduce viewers to some amazing places and remote fisheries that many have probably never heard of.”

As early teaser clip from the recent trip to St. Brandon’s is now live on Vimeo, and can be accessed at the following link:

The release date for the new film is scheduled for the fall of 2013, with a tentative world premiere date set for Friday, November 1, 2013. As with earlier film projects, Confluence Films will offer early screening and premiere event opportunities to qualified conservation organizations. Fly fishing retailers, conservation groups and clubs will have the chance to exclusively premiere the new film (Waypoints) in their area as a fundraiser for fisheries-based conservation projects. Interested groups should contact Jim Klug of Confluence Films at (406) 585-8667 or by email at [email protected].

As with previous Confluence Films movies, DVD’s will be available through fly fishing retailers and specialty shops. As with the most recent film Connect, Waypoints will also be available for download in both standard and HD formats on iTunes. Project updates, news, “behind the scenes” materials, and early trailers will be available over the course of the next twelve months at www.confluencefilms.com.