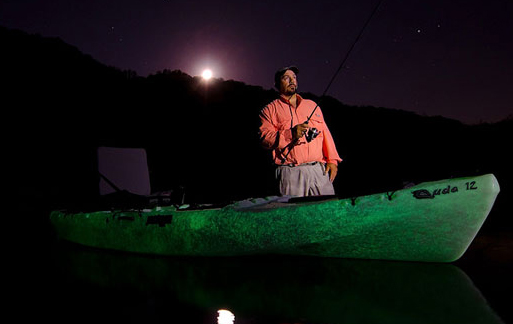 Jackson Kayak has launched its Illuminati glow-in-the-dark fishing kayak series this past week in Rock Island, Tennessee.  Using its annual Dealer Summit as a launching pad, Jackson Kayak President, Eric Jackson, unveiled its new color option for their fishing fleet, Illuminati.  After charging on any light source, any of Jackson Kayak’s core fishing series built with Illuminati will glow for hours after dark.

The glow in the dark option for colors was developed for both convenience and wow factors.  Illuminating kayaks can be seen from a great distance, allow for gear to be viewed with relative ease on the deck after dark and can key for fishing species that come out only at dusk.

“We developed this option for those late night cruises, for those who find themselves in the middle of the river or lake after dark, finding your gear on a luminescent deck, for those traveling on overnights and in open seas where being seen by buddies is key” states James McBeath, Marketing Director, “but mostly we find it simply the coolest thing on water after dark!”

“The Illuminati series is a surreal experience when on the water, but that cool factor is not the only reason we feel it will be a difference maker with anglers,” states Drew Gregory, Jackson Kayak fishing guru.  “There are many functional uses, including better visibility to others while on the water, enough glow light to do most tasks without the use of a head lamp, and if you drop any lights inside the translucent hull it really beams like Casper to draw in those bait fish!!”

While auxiliary lighting is still required to meet USCG regulations, the Illuminati series adds additional visibility that can be both handy and add an additional margin of safety in many situations. The Illuminati kayak series begins with the kayak fishing fleet that includes the Coosa, Cuda 12, Cuda 14 and the Big Tuna.  These kayaks are immediately available at all of Jackson Kayak’s fishing dealers at an additional cost of $200.

About Jackson Kayak:  Jackson Kayak was founded in 2003 by Eric Jackson and Tony Lunt. Currently located in Sparta, Tenn., near the Caney Fork River, Jackson Kayak designs, builds, and manufactures leading whitewater, fishing and exploration paddlesports products. With the moto “Build it like it’s your own”, all of their products are Made in the USA in growing support of the local Tennessee economy.  Market leaders in both the whitewater and kayak fishing kayak manufacturing and strong in the exploration sector, Jackson Kayak continues to introduce new product lines each year; this year including a new SUP line amongst 8 new products for 2013.  Jackson Kayaks success is largely due to delivering high quality products through paddlesports specialty shops globally; all supported by regional, national and international team members who are engaged to promote the paddling lifestyle.