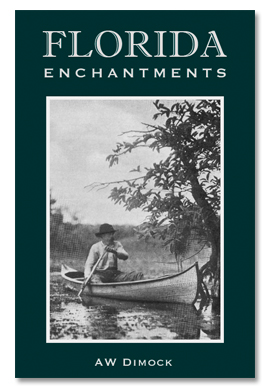 From the acclaimed author of The Book Of The Tarpon, comes another collection of A.W. Dimock’s essays and adventures from a century ago.

Florida Enchantments was first published in 1908 when the Everglades and Ten Thousand Islands were still reeling from the rampant slaughter of herons, egrets, and alligators for their plumage and hides. While Dimock didn’t take part in the poaching, his notions of conservation were still a bit crude by today’s standards.

Dimock was working primarily as a writer during the time, but he was also earning commissions from museums, zoos, and aquariums that were eager to exploit the wondrous creatures of the Florida swamps, rivers and estuaries. Of note: these were hardscrabble times when people ate and profited from whatever was accessible, and there are graphic depictions within this book of Dimock “collecting” species that have since been protected for generations.

Beyond Dimock’s hunting and subsistence stories, he includes a collection of colorful essays about fly fishing, moonshiners, hurricanes, outlaws, and the embattled Seminoles. He tells of grueling treks by canoe (and foot) from Everglade City to Miami, and an ill-fated mission to Lake Okeechobee with a drunken Indian scout. With stunning clarity, he transports us to a time when the heat, mud, snakes, and mosquitoes were not just minor nuisances that could be easily avoided.

Accompanying Dimock’s writing is a remarkable collection of vintage photography shot by his son, Julian. What he accomplished beneath a black hood with a wobbly tripod and glass plates is reason enough to buy this book.

Buy from Amazon.com
Buy from Barnes & Noble
Read an excerpt