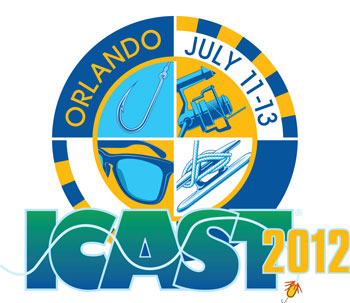 ICAST 2012 (International Convention of Allied Sportfishing Trades) was held July 11-13 in Orlando.  Over 9,000 members of the fishing community attended the event.

The American Sportfishing Association (ASA) hosts ICAST and represents the sportfishing industry and sportfishing companies.  Mike Nussman, ASA president and CEO, was happy with turnout.  He stated: “The last time we were in Orlando it was 2009.  Despite an ailing economy, we had a good show. But this year, we had a great show. Show attendance, overall, [was]up 23 percent and buyer attendance [was]up 25 percent. We had 9,000 show attendees with more than 3,000 buyers and more than 760 media in attendance to cover the show.”

Nussman felt the success was due, in part, to their emphasis on creating a show the industry wants.  ASA expanded business seminars and worked with exhibitors and media representatives.

ICAST Director Ken Andres echoed Nussman’s sentiments. “We saw great attendance this year with lots of product on display on the show floor. Our aim is to continually enhance the show for the benefit of our exhibitors, buyers, media and other attendees who now view the show as a “must attend” industry event. We look forward to seeing everyone in Las Vegas in 2013.”

This year, the New Product Showcase included 21 categories, as well as the overall “Best of Show” award.  ASA added a new category—FishSmart Tackle—to recognize gear and tackle that helps improve the survivability of fish.