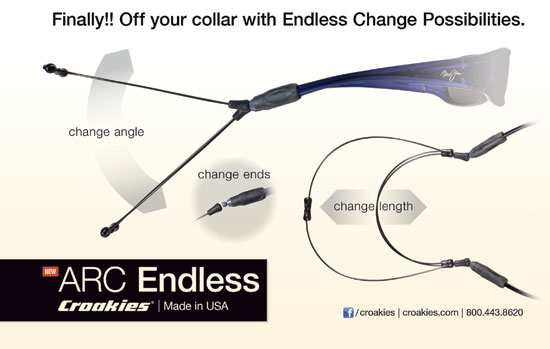 Croakies®, the original manufacturer of eyewear retainers sold worldwide, announces its newest, most versatile and lightweight sports retainer yet, the Endless ARC.

The Endless ARC features an articulating re-attachable cable that easily adjusts between two different angles; up off the neck or down resting on the neck and collar. The product’s built in flexibility provides a terrific option for those seeking a multi-use eyewear retainer. The attachable cable seamlessly slides on and off the ends of glasses with the option of two plastic buds that attach to the back of the cord. These buds, the ARC MAX End and the ARC MIDDI End, are built to fit most all glasses temple widths.

About Croakies
It began with a simple idea and eventually spread into a multifaceted vision. In 1977, a local ski patrolman from Jackson Hole, Wyoming realized the need for an eyewear retainer that would grip his shades and secure them tight to his body while performing all aspects of his job. Grabbing some old neoprene from a kayak spray skirt and a pair of scissors, he constructed what was then recognized as the first Croakies®. Now, more than three decades later, we are still hard at work designing and growing our line of eyewear retainers.