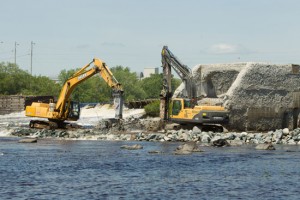 Arlington, VA—Today marks the beginning of the removal of the 200-year-old Great Works Dam on Maine’s Penobscot River and starts a process that will eventually open more than 1,000 miles of river to endangered Atlantic salmon and 10 other species of ocean-going fish.

“History is being made today, for the future of the Penobscot and for Atlantic salmon and other fish,” said Chris Wood, Trout Unlimited’s president and CEO. “This unprecedented collaboration among a wide range of stakeholders will result in a healthier river, more fish and as a result, better angling opportunities in the years to come.”

After more than a decade of collaboration among the hydropower company that owned the river’s dams, state and federal officials, conservation groups and the Penobscot Indian Nation, the Great Works Dam, and later the Veazie Dam, will be removed. A bypass will be constructed around a third dam. This will open the river to migrating salmon, sturgeon, striped bass, shad and other fish for the first time in generations. “The restoration of the Penobscot River is one of the largest projects of its kind in the country,” said Elizabeth Maclin, TU’s vice president of Eastern conservation. “And it is the last, best chance for the recovery of wild Atlantic salmon in the United States,” Maclin said.

“Years of hard work is paying off for Atlantic salmon,” said Bill Oleszczuk, chair of Maine’s TU council.  “ I look forward to seeing the Penobscot filled with Atlantic salmon in the years ahead,” Oleszczuk said.

The Penobscot River drains roughly 9,000 square miles in Maine, or about one-third of the state.  Maine is home to the last remaining wild Atlantic salmon in the nation, and the Penobscot holds the state’s largest population of Atlantic salmon, with annual salmon runs estimated at 50,000-70,000 prior to 1830.  Last year, approximately 2,000 salmon returned to the Penobscot, which represents more than 90 percent of the total population that returned to Maine’s rivers.