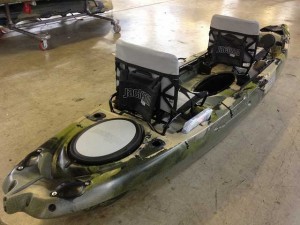 ATLANTA – March 29, 2012: Jackson Kayak has once again teamed up with professional kayak angler pioneer Drew Gregory to announce the release of their newest fishing kayak, the Big Tuna – a solo or tandem fishing vessel. This is the third fishing kayak that Jackson Kayak and Gregory have developed together following last year’s Coosa and the ‘Cuda, released earlier this year.

The Big Tuna is a vessel unlike any other on the market, with several never-before-seen features in the kayak fishing world. One of the unique elements is the “Tuna Tank” (patent pending), a bait/live well that requires no plumbing or electronics. The operating directions are to simply put your kayak in the water. It’s that simple, because it utilizes water from beneath the boat to circulate into the tank keeping fish lively and fresh. The tank also resides in the center of the boat for easy access, bait management and optimum boat performance.

“The Big Tuna is literally the most versatile kayak I’ve ever seen,” Gregory explained. “Sure, it’s a fishing kayak that can handle any style of fishing and do it with multiple anglers in the boat, but it is also built to handle any number of activities from general family recreation, to scuba, snorkeling, hunting, crabbing, lobstering, bow fishing, spear fishing and of course it’s the perfect guide boat!”

“I can’t tell you how fired up I am to finally have a tandem fishing kayak for myself and our customers,” said Eric Jackson, president of Jackson Kayak and member of the JK fishing team. “This kayak is a game changer for fishermen worldwide.”

Other prominent Big Tuna features include the popular elite seats, with Jackson Kayak’s signature “hi/lo” seating as well as the new “face-time” seating. This allows users to rotate the front seat and face their part¬ner. The boat’s functionality allows for more than 100 seating combinations. Jackson Kayak’s architects have made the Big Tuna easily convertible and fishable as a solo boat as well.

About Jackson Kayak: Jackson Kayak was founded in 2003 by Eric Jackson. Currently located in Sparta, Tenn., near the Caney Fork River, Jackson Kayak designs, builds, and manufactures a multitude of models. Their line of high quality kayaks includes whitewater, creeking, touring, environmental, and fishing. Converting an old Levi Jeans factory into their manufacturing headquarters, Jackson Kayak has assisted not only in furthering the kayak industry but also promoting the economy of Sparta.

About Drew Gregory: Drew Gregory, known as “BasserDrew” to many, is a professional kayak angler and an expert in bass fishing America’s rivers and creeks. Gregory hails from Atlanta, Ga., and currently resides in Charlotte, N.C. He has been river fishing since he could handle a rod and reel, but for the past nine years has been pioneering the sport of kayak fishing in freshwater rivers. Standing up and fishing out of his signature series kayak, the Jackson Kayak Coosa, for smallmouth, largemouth and shoal bass is his passion. Gregory has logged more than 750 river kayak fishing trips and is the co-founder of RiverBassin.com. Visit www.DrewGregory.com for more.