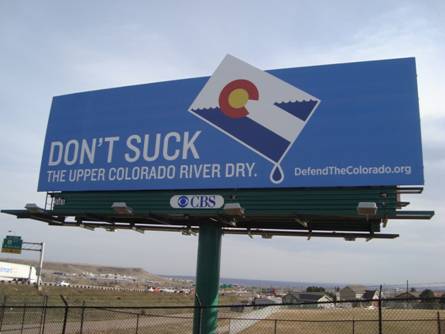 (Denver)— A coalition of river advocates has unveiled a billboard on I-70 that highlights the threat to the upper Colorado River from massive water diversions to the Front Range—diversions that are sucking the life out of the upper Colorado and degrading irreplaceable mountain areas where many Coloradans love to fish, hunt, and recreate.

The billboard is part of a larger grassroots campaign that is rallying Coloradans to help protect this popular western slope recreation destination.

The billboard, in the foothills of Golden near the 470 exit, shows a state flag image being drained of water and warns, “Don’t Suck the Upper Colorado River Dry.” The message will reach an estimated 180,000 people each day who travel this major east-west corridor.

“Coloradans need to know that the health of the upper Colorado and Fraser rivers is jeopardized by these water diversions,” said Sinjin Eberle, president of Colorado Trout Unlimited. “We’re asking our state leaders to step up and finish the job of protecting these special places.”

For years, large-scale water diversions to Denver and the Front Range have severely depleted and at times nearly sucked dry entire stretches of the upper Colorado River and its tributaries, including the Fraser River. The low flows and higher temperatures have caused dramatic declines in fish and other benchmarks of aquatic health. Low flows have also contributed to the spread of smothering silt and choking algae.

River advocates warn that the proposed expansions of the Moffat Tunnel and Windy Gap diversion projects could push the upper Colorado ecosystem to the brink of collapse unless environmental mitigation plans for the projects contain stronger flow protections for the rivers. Those proposals are currently in the final stages of permitting and under review by federal regulators.

The billboard is aimed at the tens of thousands of Front Range residents who travel up I-70 each week to hike, ski, fish, raft and play on the West Slope. Outdoor recreation is a $10 billion a year business in the state, supporting 107,000 jobs and generating nearly $500 million in state tax revenues. Many towns in the Fraser and upper Colorado River valleys depend heavily on outdoor tourism for their economic health.

“It’s important that Front Range residents understand the seriousness of these diversion impacts and show their support for healthy rivers,” said Drew Peternell, director of Trout Unlimited’s Colorado Water Project. “We can meet our water needs while preserving our rivers, but that will only happen with stronger protections for the Upper Colorado.”

Gov. Hickenlooper and other state leaders have a responsibility to protect these rivers and the state recreation economy that depends on them, said Peternell.
A 2011 state study that showed stronger measures were needed to keep the upper Colorado system healthy. Moreover, in a recent letter citing that study, the EPA called for a “more robust monitoring and mitigation plan” for the Windy Gap proposal.

The groups are calling on state and federal officials to support stronger protection measures for the upper Colorado, including higher spring flushing flows and a monitoring plan for the river.

“We’re asking Gov. Hickenlooper to speak up for the Colorado River,” said Peternell. “He has an opportunity to be a hero for the river.”

In response to the campaign, thousands of Coloradans have raised their voices for river protection. The Defend the Colorado website features a “Voices of the River” gallery profiling Fraser Valley residents and visitors who speak eloquently about their concern for the river. Moreover, thousands of Coloradans and more than 400 businesses have signed petitions asking state leaders to protect the rivers and state tourism.

“These are special places,” said Jon Kahn, owner of Confluence Kayaks in Denver. “Many Coloradans live here because of our state’s magnificent rivers and recreation opportunities. That quality of life is at risk unless our leaders act.”

To learn more about diversion impacts on the river and how you can raise your voice to help, go to www.defendthecolorado.org