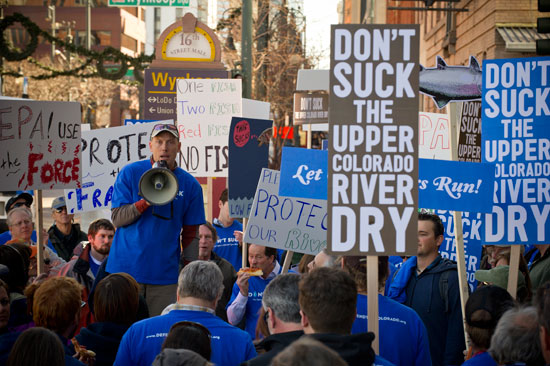 “This is a moment of truth for the state,” said Sinjin Eberle, president of Colorado Trout Unlimited, which helped organize the gathering of Denver residents, kayakers, anglers, outdoor recreationists and other river supporters. “We have to do something to save our state’s namesake river from dying.”

Scores of signs at the event underscored that theme, including “Don’t Suck the Upper Colorado River Dry,” “Protect Our Flows,” and “EPA: Be a Hero.”

The rally is part of an ongoing campaign to protect the Upper Colorado River and its tributary, the Fraser River, and the mountain communities, businesses, people and wildlife that depend on them. The Denver rally, say organizers, was meant to show EPA and other federal decision-makers that Denver residents care about the state’s outdoor quality of life and the health of rivers.

The Defend the Colorado coalition is asking EPA–which Eberle called a “partner” on river protection–to take additional steps to ensure the health of the river in the face of two proposed water diversions.

Already 60 percent of the Upper Colorado is diverted to supply Front Range water users. The Windy Gap Firming Project proposal, along with a separate Moffat Tunnel water project, could divert as much as 80 percent of the Upper Colorado’s natural flows. The current proposed Windy Gap protections from the Bureau of Reclamation fall short of what’s needed to address mounting problems, such as low flows, rising temperatures, spreading algae and smothering sediment.

As Eberle told the lunchtime crowd, a state study released earlier this year shows that entire populations of native fish and the insects they feed on have virtually disappeared from the Colorado River below the Windy Gap Reservoir due to past diversions.

“Is this what we want to see happen to our rivers?” Eberle asked.

“NO!” the crowd responded.

Field and Stream magazine editor-at-large Kirk Deeter, a Colorado resident, said he was lucky enough to travel the world in his job but always looks forward to coming home to his home state and home waters. He called the Upper Colorado a ”special place” that deserves protection.

Also speaking was Jon Kahn, owner of Confluence Kayaks in Denver, who stressed the economic impact of water-based recreation, which he noted contributes “hundreds of millions of dollars” annually to the state’s economy. “I am just one of hundreds of business owners whose livelihoods depend on healthy flows in our rivers,” he said.

According to the Defend the Colorado coalition, additional steps must be taken to protect the rivers, including:

· Managing the water supply to keep the rivers cool, clear and healthy.
· Ensuring healthy flushing flows to prevent river habitat from filling in with silt.
· Monitoring of the rivers’ health and a commitment to take action if needed to protect them.
· Bypassing the Windy Gap dam to reconnect Colorado River and restore river quality.

“The health of the Colorado and Fraser rivers is critical to local communities and the state’s recreation economy,” Eberle said. “But many Coloradans don’t realize that these rivers are having the life sucked out of them. At some point, they cease to become functioning rivers—and we lose a huge part of what makes our state a great place to live. Our state and federal leaders need to finish the job of protecting these incredible places.”

The group is planning additional rallies and events this spring to highlight the plight of the rivers and demand action from state and federal decision-makers.

The Defend the Colorado coalition includes Colorado Trout Unlimited and a range of stakeholders, including conservation and wildlife groups, landowners, and outdoor recreationists. More than 400 western slope businesses have signed a petition asking state leaders to protect the Upper Colorado.

For more information, go to www.DefendTheColorado.org.

Trout Unlimited is the nation’s largest coldwater conservation organization, with 140,000 members dedicated to conserving, protecting, and restoring North America’s trout and salmon fisheries and their watersheds.

Colorado Trout Unlimited has more than 10,000 members and 23 chapters across the state. Its members and volunteers act as advocates and conservators for their home rivers through on-the-ground, grassroots effort