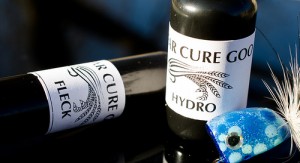 Southlake (Jan. 10, 2012) – Thick, Thin, and Tack Free.  Three fly tying products designed, manufactured, and distributed in the United States by Clear Cure Goo in 2011.  While many industry leaders would consider it a successful year, Brian Carson continued the evolution of his material developing a new line of products for 2012.

Clear Cure Goo has improved upon its first generation ultraviolet light.  The new ergonomically designed LED light, which serves as the catalyst to cure the material, boasts the same high-quality LED bulbs as its predecessor.  However, the color has been changed from a neutral black to an electric blue for increased visibility.   It also sports Clear Cure Goo’s brand name a removable lanyard for easy storage.  “The biggest improvement to the new light is the inclusion of a stronger, more durable ‘On/Off’ clicker,” said Carson.

Clear Cure Goo Hydro, a liquid form of Clear Cure Goo, is now available for consumers in 2012.   “Hydro is the most versatile Clear Cure Goo to date, perfect for midges all the way saltwater flies. ” said Carson.  “It is crystal clear, entirely tack free, and cures in seconds, making it a perfect material to use as a top coat, a protective layer for poppers or  a stand alone product.”  Carson believes the new Hydro material will replace traditional head cement in the near future.

Clear Cure Goo Fleck is now available in 2012. It contains flecks of gold, silver, green and blue. It is a great material to use as an accent piece or a stand alone product. Clear Cure Goo Fleck contains enough flash to get attention, but not enough to scare off a fish. A perfect tool to have in your tying arsenal .