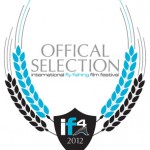 Calgary, AB. – The International Fly Fishing Film Festival (IF4) is excited to announce that the filmmaker selections have been finalized for 2012. From an overwhelming variety of entries sent in from all corners of the globe, by amateur and professional filmmakers alike – IF4 is excited to announce that the following filmmakers have been selected and will be featured at all 2012 IF4 screenings throughout North America:

The 2012 IF4 line-up features over a dozen unique films, for a total running time of over two hours. Many of the films within the 2012 IF4 schedule will be screening for the first time ever!

Visit flyfilmfest.com for more details about IF4 filmmakers, festival cities & and the 2012 IF4 schedule.
Promotional trailer: http://vimeo.com/34054073