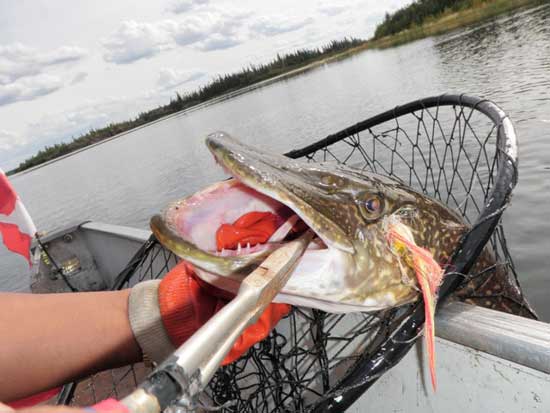 Why… oh why, do so many of us fly fishers consider pike an “afterthought?”  Why do we demand that pike are killed on those pristine Colorado (and other state) “trout” waters, throughout the Rocky Mountain region?

Pike are no less an “invasive species” than those rainbows, browns, and brookies are, after all.  Indeed, they have a name for the predation of one strong species over a weaker one… it’s called “Natural Selection.”

There is absolutely nothing that rivals (at least in the freshwater realm) a savage take of the fly by a northern pike.  And for that, so much as I love the wild runs of rainbows and salmon caught by drifting beads… for the life of me, I don’t know why more fly anglers don’t intentionally chase the ferocity of pike on the fly… in Alaska… in Canada… and in the northern “Lower 48.”

We’d all do better to turn more of our fly angler customers onto northern pike.

If there’s one place to turn yourself, or your customers, on to northern pike, it’s northern Saskatchewan, in Canada (www.sasktourism.com).  Specifically Lake Athabasca… and more specifically Blackmur’s Athabasca Lodges (www.athabascalake.com).

You need to check this out… and you need to send clients there… but only the ones who can cast 40 feet with a gaudy streamer… and want to have their world rocked by a sheer freshwater predator.