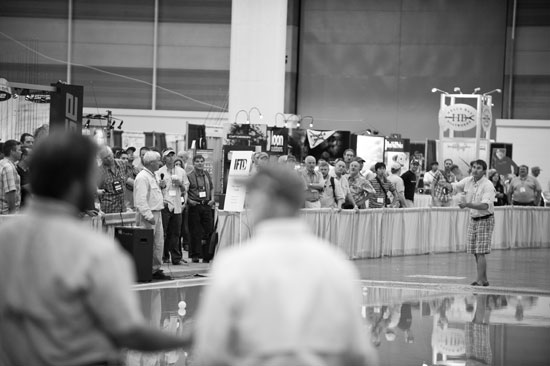 Now that the dust has settled, and all of us have returned to our routines after the International Fly Tackle Dealer (IFTD) trade show in New Orleans, it’s worth a brief reflection on what happened, what didn’t happen, and where this whole fly fishing trade show thing is headed.

After all, as editor of Angling Trade, for better or worse, I do this every year.  Interestingly, for the past several years at least, I come away from the trade show having heard many of the same comments:  “Man, I wish there were more retailers at the show,” or “Gee, we should change the time of year,” and “We should look at merging the fly fishing show with ICAST… or OR…”  Stuff like that.  And all opinions are certainly valid.  You know, one of the great things about the fly fishing business (and I really mean this) is that there is seldom a shortage of opinions.   Qualified, educated opinions, no less… and that’s actually a very good thing.

But let’s start with some facts, and go from there.

Those of you who know me, personally, and those of you who have read my columns over the years already understand that I am no cheerleader for AFFTA.  I believe there must be a fly fishing trade organization.  I respect the mission.  But I have never held back on criticism of AFFTA when I felt it was warranted.

That said, I think, in a nuts-and-bolts context, that AFFTA put on a helluva show.  AFFTA hired Randi Swisher as president to put muscle behind the trade show.  Randi delivered.  Gary Berlin delivered.  Mischa Jones delivered.  You can say what you want about the viability and need for a trade show, where and when it should happen, and what purpose it should serve… but if the job was to create an efficient, well-organized interesting trade expo (and I think it was), I don’t think anyone can fault the way IFTD was executed.

New Orleans… yeah… it was damn hot.  But it is a great town.  And it was a good choice, if for no other reason than to get out of the Denver rut (and I live near Denver, and Angling Trade spent a lot more money to be part of this trade show than we ever have).  And by the way…  how ‘bout them fly fishing guides in Louisiana who rallied, and busted their butts, and put so many show attendees on redfish… at the absolute toughest, most challenging part of their fishing season (it was like having a trade show in the Rockies during the peak of runoff)?

Do we wish that the show were busier?  Sure.  Does AFFTA wish it had more retailers at the show?  Of course.  For the record, by my last accounting, retailer attendance was down just over 10 percent from last year, which isn’t bad, considering the fact that there are 20-something fly shops in Colorado, and one in Louisiana.  Maybe… just maybe… losing a population of guides walking around looking for free swag at booths isn’t a bad thing, after all.

Here’s the real deal, and the real question.  Does the fly industry need its own trade show?

That, of course, depends on whom you ask.

There is no doubt that times have changed, vis a vis how products are introduced to dealers… via the Internet… through rep networks, and all of that.  It strikes me as odd, when a manufacturer complains that they “don’t write much business at the trade show” anymore, when in fact, they’ve already sent their reps to introduce new products and services, months before the trade show takes place.  Isn’t that stealing your own thunder?

Okay, I get it… in the fly world, we have so many product manufacturers who have different production cycles… rods take X to make… soft goods, that’s 3X… reels… 2X.  I don’t think we’re ever going to get all the manufacturers in the fly world on the same page, as far as timing is concerned.  Forget about it… ain’t gonna happen.  Done.

Can we integrate a fly trade show into ICAST, or OR?  Depends on whom you ask.  Sure, there’s valid rationale for putting fly fishing inside of a larger fishing arena… or a larger outdoor arena.  But the rub is, the IFTD trade show is a major source of revenue for the trade organization.  Take away the show… take away the money (unless someone figures out how to do that… and I’ve asked, but I haven’t heard any good answers).

Now, to a certain extent, yes… the money from IFTD goes to fund AFFTA… which uses the money… to make another show.    And that’s its own perpetual motion machine.

But I would contest that AFFTA has done more of late, by way of engaging in conservation causes, promoting the sport, and so on—things beyond the show that do indeed serve the interests of all in this industry, from retailer to manufacturer.  As such, I don’t think we can throw the baby out with the bathwater.  Especially, given the political climate, not now.  Fly fishing needs an entity, and a voice.

The beauty—and the curse—in all of this, is that the retailer holds the keys to all of it.  If manufacturers, and AFFTA itself, want to make a trade show that offers tangible value for retailers to attend… that’s on them.  Reno (the 2012 IFTD location) is,  in my opinion, another step in the right direction.

If retailers don’t want anything to do with AFFTA and a show… that’s a choice they make, perhaps at their own peril (perhaps not).

If we want to have a “trade show” that’s really more of a media event… a meeting of the core in the industry (dare I suggest FFF, that this is the real “conclave”)… well, we already have that.  And it’s a damn good one.

If we want something larger, we need to keep pressing, keep brainstorming, and keep working together to find it.  Maybe we do two days of industry “conclave,” and a third day open to the public (in my opinion, given the amount of business happening, and the relative silence on the show floor by 2 p.m. Saturday afternoon, that’s worth talking about).

But the finger pointing should be over.  The complaints… whatever.  We need to get together and decide what we really want, and then work together to figure out exactly how to get there.  All the right pieces are on the table.

It’s a matter of putting them in their correct places.