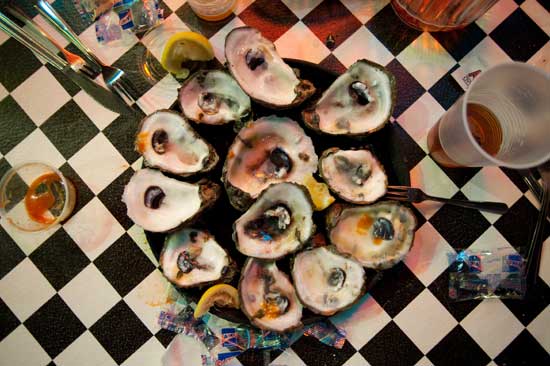 Sure, you’re going to be busy as (heck) if you’re headed to New Orleans for the IFTD show.  And it’s going to be hotter than (heck) too outside the convention center and hotels…

But New Orleans is one of the most magical American cities, at any time of year.  And there are many things to see and do beyond the tourist-central  French Quarter.

Here are some, recommended by AT’s local redfish guide network:

•    Check out Café du Monde in the French Quarter for some strong coffee and beignets (a Cajun powdered sugar-coated fried fritter of sorts… must be tasted to be fully appreciated).  Café du Monde in the Quarter (down by the levee) is a great place to get jolted into the start of the day… or a nightcap to the party that kept rolling. www.cafedumonde.com

•    Eat a Muffuletta sandwich from the Central Grocery at 923 Decatur Street in New Orleans.  You’ll hear about Po’ Boys… but the real meal in NOLA is the muffuletta—ham, salami, etc. on sliced Italian bread with spicy olive spread in the mix.  Unreal.

•   Mid City Lanes Rock ‘n Bowl.  If you’re looking for good Zydeco music (or “swamp pop” for that matter), check out Geno Delafose & French Rockin Boogie on Thursday August 18.  The Rock ‘n Bowl is legendary… cold beer, hot music, and pins crashing in the background.  Just a bit out of downtown on 3000 South Carrollton Ave. in the Garden District.

•    Another solid music option is to visit Frenchman Street, in the 7th ward.  This is where some of the best live performances in the city happen, every weekend.  Creole cottages also make this street an interesting architectural attraction.

•    Drago’s Char-broiled Oysters.  You can eat oysters raw all you want… but the real deal is the char-broiled variety you find at Dragos Seafood Restaurant on Poydros Street in NOLA or Arnoult Rd. in Metairie.  You’ll smell the broiler when you’re a few blocks away.  www.dragosrestaurant.com.

•    You’re several months late for Mardi Gras (or early, depending on how you look at it, but you can check out the floats at Mardi Gras World, right behind the convention center.  It’s worth a side trip.

Of course, if you like music, drinks, food, and fun, New Orleans is right up your alley… good luck exploring, and let the good times roll.