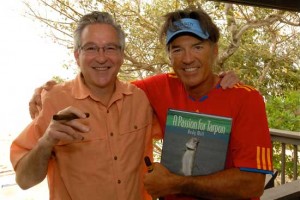 At BookExpo America 2011 in New York, A Passion for Tarpon by Andy Mill won two Benjamin Franklin Awards from the 3,200-member Independent Book Publishers Association, the largest such trade organization in the world. The awards are named for America’s most cherished original publisher/printer. New book titles are grouped by genre, and winners chosen for editorial and graphic excellence by panels of 150 experienced publishers and experts from across the country.

A Passion for Tarpon won the prestigious gold-medal award in the categories of top regional book of 2010 and top sports/recreation book of 2010, a distinction no fly-fishing book had previously achieved.

“I was honored to be at the Javits center ceremony to accept the Benjamin Franklin trophies in behalf of Andy and our entire supremely talented team who worked together for years to create this very special book,” said publisher Tom Pero. “Congratulations to all on this well-deserved recognition and honor: graphic designer John Cole; photographers Pat Ford, Ted Fauceglia and Don DeMaria; writer Steve Kantner; tarpon biologist Jerry Ault; illustrator Greg Pearson.”

A Passion for Tarpon also received the bronze medal in the Independent Publisher IPPY Awards for best recreation/sports title. And the New Generation Indie Book Awards named A Passion for Tarpon a finalist in its category of general non-fiction—out of the thousands and thousands of non-fiction works about an infinite range of topics published by independent presses last year.