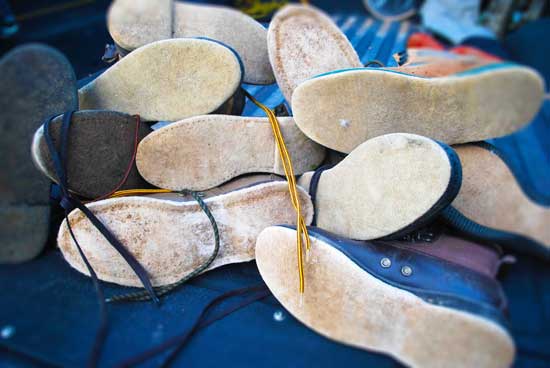 Angling Trade has learned that Simms Fishing Products told its sales representatives, and is now informing dealers, that the company plans to reintroduce boots with felt soles in its 2012 product lineup.  You may remember that just a couple years ago, Simms was the company that beat the drum loudest about going felt-free, and swore off production of felt-soled boots after 2010.

As most of you know, felt has been associated with the spread of aquatic invasive species… nasty things like New Zealand mud snails, didymo (rock snot), as well as the parasite that causes whirling disease.   In some states, the threats have been taken seriously enough that felt is no longer allowed.  You can’t fish in felt in Maryland or Vermont, and starting next year, felt will be banned in Alaska.

The science hasn’t changed, but neither did consumers’ and dealers’ attitudes toward wearing felt—there are still many felt stalwarts who contend there is no adequate substitute for traction in a river.  And apparently, a good number of dealers claimed they had plenty of customers who could not be sold on felt alternatives.

As such, Simms director of marketing and brand management Diane Bristol said that the company labored over the decision, but ultimately yielded to the demands of customers, specifically dealers, who said they needed felt in the arsenal.

“It’s ultimately about choices, and allowing customers to make their choices on boots with felt,” said Bristol.  “We didn’t take this decision lightly, but ultimately it came down to listening to what our customers wanted.”

Which many will assume means it came down to a matter of money… not just for Simms, but also for dealers.

Simms says it is not disengaging from the invasive species fight by any means.  Plans are to reintroduce felt on only three boot models, and the company also intends to amp up efforts to inform consumers about the need to wade clean through additional literature and labeling.

Still, Simms will get plenty of flak for the turnaround, and no doubt expects it.  But keep in mind that other major boot makers like Orvis, Patagonia, and Korkers, kept right on chugging with felt production in recent years.  So don’t expect any stones thrown from glass houses.

Thus, the Simms turnabout is less of a head fake, and more a situation where Simms tried to lead the market across the avenue, then got caught alone in traffic when the lights changed.

Hopefully, the industry as a whole, takes a harder closer look at the felt issue… not necessarily to regulate, rather to amp up efforts to inform the public about the effects of invasive species.

In truth, aquatic nuisances can be transported in many boot materials, not just felt.  In some ways, the notion that an angler got a “free pass” from cleaning boots by buying models with rubber soles was as dangerous as it will be to allow responsible choices and encourage responsible care regarding felt.

Now the choices are more open.  It will be interesting to see where consumers, retailers, and manufacturers all go with them.