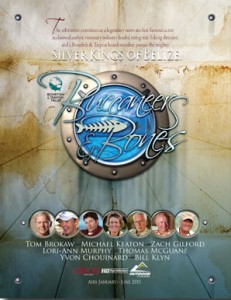 Denver, Colorado – Officials from Orion Multimedia, the world’s largest producer of outdoor adventure television, have announced that the fly fishing television series Buccaneers & Bones and Pirates of the Flats were each honored by the Silver Telly Council during the 32nd Annual Telly Awards. The first episode of Outdoor Channel’s Buccaneers & Bones won a Bronze Telly in the category Nature & Wildlife, while the final episode of ESPN2’s Pirates of the Flats won a Bronze Telly for Editing. The 32nd Annual Telly awards honor film and television productions which aired in 2010. Both series were produced by Orion Multimedia in cooperation with Bonefish & Tarpon Trust.

The series Pirates of the Flats earned its fifth Telly award along with a national Emmy nomination, as it had already earned 2009 honors in Nature & Wildlife, Graphics, Editing, and Videography. As the precursor to Buccaneers & Bones, Pirates of the Flats was taped over a 2-week span on Abaco Island in the Bahamas. The series aired on ESPN2 and was the highest rated saltwater series in the first quarter of 2010 and the second-highest overall outdoor series for the period.