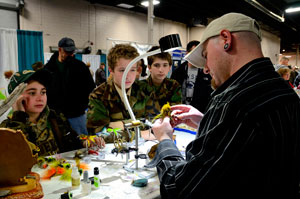 When the wind is gusting 20 miles-per-hour, there is ten inches of snow and ice on the ground, and the temperature is hovering around 17, who is willing to stand outside and test a fly rod?

More people than I thought.

I had to pause at the entrance to the Fly Fishing Show in Somerset, New Jersey, and grin this January, watching dedicated enthusiasts shivering for the sake of a Spey rod test. It told me that anglers were here to buy, and gauging the number of folks on the floor chatting with outfitters in far-flung locales, I’m willing to say it looks like they’re at least thinking about traveling again, too.

However, travel- and destination-related seminars weren’t quite as bustling as the show floor, though Saturday’s seminar attendance spiked, according to a few presenters. Regardless, rods, reels, lines, and flies were moving and spirits were up, even more so than last year when despite a tougher economic climate, vendors seemed content with their show business.

I got the chance to talk with Tim Kirkpatrick, owner of Colorado’s Steamboat Flyfisher. This was his third years attending the New Jersey Show, and I was curious about what made the east coast trek so appealing for a small operation.

“It still amazes me how many people come into the shop and say they saw us at Somerset,” Kirkpatrick said. “We’re primarily here to tell people to come to Colorado and it seems to work. It also gives us a chance to push products people don’t buy around here. Pushing western-made rods, for example, at the New Jersey show works well. At the Denver show, we push our east coast manufacturers.”

Even though show attendance was even better Saturday than the Friday I visited, there always seemed to be a wait to cast at the indoor pool when I passed by. What rod seemed to garner the highest number of test casts? G. Loomis’ NRX. I saw a fair amount of bamboo getting waved as well. Certainly this doesn’t mean each high-end rod tested was purchased, but it was refreshing to see people at least exploring the possibility of buying top-shelf gear again. But for those that are still watching their bottom line, there is nary a shortage of budget-friendly gear being produced, which I believe steps up in quality year by year. The industry bounce-back may not be complete. It just seems to be bouncing a little higher each season.

“I know that most of the vendors I spoke with at Somerset were extremely happy with the number of people and more importantly, buyers that attended the show,” said John Frazier, Editor of Fly Fishing in Salt Waters. “The past couple of years have been trying, so hopefully this is a sign of good things to come. Let’s all keep our fingers crossed!”