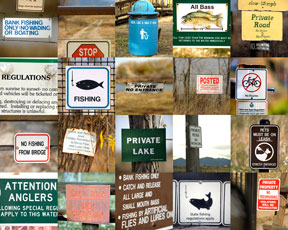 FERNANDINA BEACH, Fla. — Access to areas to enjoy their sport has long been considered a challenge faced largely by hunters, but results of a recent survey reveals that anglers also face some of these same obstacles. When asked by AnglerSurvey.com if, in the past year, they had to cancel a trip or stop fishing a particular area because they could no longer access it, 19.5 percent of those anglers interviewed said they had. Those numbers remained largely consistent with results to the same question the previous year.

Most of those concerns (81.5 percent) in the 2010 survey, which measured angler experiences from 2009, involved fresh water fishing locations where low water levels due to drought or lake draw downs, pollution generated from excess runoff as a result of storms, boat ramp closures and limited public right of entry points can all contribute to limited angler access. Interestingly, only 19.7 percent of access concerns affected saltwater anglers that year, but in the January 2011 survey (which measured angler experiences from 2010), that number jumped to 24.8 percent, an increase of more than five percent.

While the survey did not examine causes for limits on access, 2010 witnessed several issues impacting saltwater fishing. Chief among these were the BP oil spill in the Gulf of Mexico, which closed down much of the gulf to fishing through much of last summer, bottom fishing closures in the Southeast, and additional permanent sportfishing closures along the California coast. These may have led to the jump in saltwater access issues.

“These closures impact not only anglers, but businesses and families along the coast that depend on sportfishing. When people want to fish, but have to cancel because they are unable to  access decent fishing spots, we see a greater deterioration of jobs, tax revenues and commerce in general. Anglers need to stay in touch with fisheries agencies and sportfishing groups to minimize any future problems,” said Rob Southwick, president of Southwick Associates, which designs and conducts the surveys at HunterSurvey.com, ShooterSurvey.com and AnglerSurvey.com.

Those who hunt, fish and target shoot are invited to participate in the surveys conducted on HunterSurvey.com, ShooterSurvey.com and AnglerSurvey.com. Each month, participants who complete the survey are entered into a drawing for one of five $100 gift certificates to the sporting goods retailer of their choice.

About AnglerSurvey.com, ShooterSurvey.com and HunterSurvey.com: Launched in 2006, AnglerSurvey.com, HunterSurvey.com, ShooterSurvey.com is a non-scientific survey designed to help the outdoor industry, government fisheries and wildlife officials and conservation organizations track consumer activities and expenditure trends. The information above represents only a small sample of the vast amount of data collected from the complete survey results and available to government agencies, businesses, the media and other interested parties. Results are scientifically weighted to best reflect the attitudes and habits of anglers and hunters across the United States.