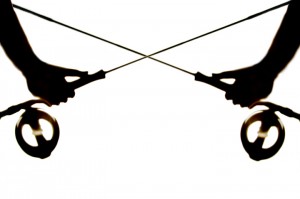 In a show of collective rod making progress, 2011 promises to be a banner year with rollouts from leading manufacturers across the board. But, in a curious twist of events, a new resin technology brought to market by none other than 3M—wizards of everything from pet and professional health care products, to fire-barrier sealants and insect repellent—seems to be garnering more spotlight than the sum total of any individual stick.

So far the noise has reached high decibels, with superlatives ranging from “stronger,” “lighter,” “faster,” to the upper echelons of “radical” and even “revolutionary.” Andy Mill, Hardy’s new U.S. consultant, tells us Sintrix rods “…are the most powerful, lightest, smoothest casting rods ever designed, EVER [sic]!” And strong sentiments have also been voiced by G.Loomis in the wake of NRX’s award-winning stints at the European Fishing Tackle Trade Expo and ICAST tradeshows earlier this year.

As for mainstay industry players such as Orvis, Scott, Sage, and (Mr.) Gary Loomis, when it comes to the Matrix Resin mayhem, they’re equally vocal as to why they’re sitting this party out.

So, is the time for a resin revolution now? Or, perhaps later?

You be the judge.

—How it works
Resin is an essential ingredient in the early stages of the fly rod building process. During the prepreg phase, it becomes the glue that, once heat activated, holds the carbon fibers in a rod together. The stronger the adhesive; the better the bond. The better the bond; the stronger the rod. A stronger rod, other than obvious decreases in smash-up potential when hooked up to a whale, can allow manufacturers to thin the blank wall and trim weight (which could technically detract from overall strength gains), ultimately altering performance and feel.

3M’s new Matrix Resin has nano-sized (microscopic) spheres of silica, which are said to perform as a uniform, homogeneous non-abrasive filler between the carbon fibers of a graphite blank. These smooth nano-silica particles pack together to reinforce the individual graphite fibers during compression (when the rod is flexed), which resists micro-buckling.

This phenomenon can be viewed much like a paper-towel core: When it’s over flexed, it buckles inward and collapses. Rods break when over-flexing causes the carbon fibers to fail on the compression side of the tubular structure. The nano-silica filler in Matrix Resin, according to its proponents, fights micro-buckling, resulting in a stronger blank.

—Believe It
If you’ve seen G.Loomis’s current ad campaign depicting rod design-guru Steve Rajeff, pencil stuffed behind his ear, rods strewn across an engineering table, you’re likely also familiar with its NRX marketing slogan, “It took 17 years to build this rod.” The statement refers to the company’s graphite rod technology progressions since the early 1980’s—from IM6 to IMX, to GL3 to GLX to NRX.

G.Loomis Brand Manager, Justin Poe, says the company has been working with Matrix Resin for about two and a half years. During that time, rods constructed with Matrix Resin have endured everything from hook and deflection tests, to corrosion on guides and weather tests. In addition to building a stronger, longer-lasting rod, the goal was to create a lighter rod with a better overall feel. A combination, Poe says, the company has achieved by way of nano-silica technology in the new NRX designs.

G.Loomis reports that NRX rods are 20 percent stronger/more impact resistant than comparable GLX offerings (the company is not releasing actual breaking strengths), as well as at least 15 percent lighter. Much of this weight reduction stems from the bolstered strength, which allows the use of less material to build the final product.

Just how much lighter is 15 percent?

G.Loomis won’t say, choosing, Poe says, to remain out of the “who’s-lightest” debate. And instead relying on stated improvements in “performance” and “feel” to carry the series.

At St. Croix, which is reporting 30 percent break-strength strides with Matrix Resin, weight reduction is a nonfactor in its marketing. Jason Brunner, St. Croix’s director of engineering, has been working with the new resin for more than one year. He says that after running the nano product against preexisting epoxies, the company noted “phenomenal” strength breakthroughs, and has since swapped out previously used epoxy resins for the 3M product in its top-end Legend Elite fresh- and saltwater lineups.

As far as changes in overall rod weight and modulus counts via Matrix Resin, Brunner says, “Not true. We’ve done the testing—and the power, weight, and actions remain the same.” You can make the rod lighter, he says, but you’re walking a fine line as far as wall thickness to strength ratios. So far, St. Croix is building its Elite blanks to the same tapers and specifications of last year’s models. The rods are stronger, cost about $10 more and, Brunner says, generally cast and perform similarly.

—Or Leave It
Like most good stories, there’s often a flipside. And the tale of nano-silica resins is no exception. Gary Loomis, owner of North Fork Composites (NFC), makers of fresh- and saltwater rod blanks, first became familiar with nano resin prototypes about 10 years ago.

Looming questions regarding nano-silica use in NFC blanks, according to his team, have revolved around consistency issues.

“NFC is known throughout the fishing industry for its consistency. Whenever we develop a new blank, whether that blank utilizes a new fiber, resin, or design, that blank will not be released into the market until we are sure it can be produced perfectly for years to come. Only then is a blank worthy of carrying the signature endorsement of Gary Loomis,” says Jon Bial, NFC’s general manager.

Back at St. Croix, Brunner agrees that the consistency of rods built with yesteryear’s nano-silica batches had been hit or miss, but counters that 3M’s new technology is the real deal: “If you’re not using this nano-silica product now, I don’t know what you’re thinking because it’s good stuff,” he says. “Bottom line, a company like 3M is not going to bring something to market that isn’t ready.”

Regarding its readiness to launch, 3M’s marketing supervisor Janet Kirkman says, “3M’s nanotechnolgy product has gone through rigorous R&D testing, verifying that every lot meets specifications and that the nano-silica particles are consistent throughout. Our customers often work with us to help ensure that each batch is consistent throughout their manufacturing process into its final composite form.”

Like NFC, Jim Bartschi, president and chief rod designer at Scott Fly Rods in Montrose, Colorado, has chosen to forgo 3M’s nano-silica Matrix Resin, at least for the present.

Bartschi says that nano-silica particles from early batches had a tendency to “clump or conglomerate” into masses that could contaminate the product, instead of reinforcing it. But, he adds, since those preadolescent phases, 3M has developed ways to polish the silica, which means better dispersals and the potential to eliminate clumping problems.

Regardless, Scott passed on the product a little over a year ago after extensive factory testing. “What we found in A-B tests of the same rods made with and without the [3M] product were no savings in weight and no appreciable increases in durability. It didn’t make sense for us,” Bartschi says.

Scott, however, continues to watch the technology closely: “We’re totally into it. There was another promising nano-resin introduced about three years ago, but it was still not quite right. The technology is promising, but it’s infant. Our job is to bring really good stuff to market that proves to work in real fishing situations… or our name is mud. We take a lot of risks—just not reckless ones.”

“We’re not ruling out the use of some sort of nano composite in the future as we test new rod materials all the time. But the 3M stuff just didn’t do it for us.”

Orvis says it was offered the material two years ago, and concluded that, “Comparing our thermoplastic system with the 3M resin system, our Helios technology showed better impact strength.” But, “We should stress that we have not cast any of the rods by Hardy, Loomis, or St. Croix. Nor has anyone else outside of their field testers and staff.”

Sage, with a team of engineers lead by Steve Greist, says it was presented with Matrix Resin from a prepregger about 18 months ago. After putting the new resin through its standard sets of procedures and testing, the company’s Director of Sales, Marc Bale, says the findings were “interesting” but not along the lines of anything “revolutionary.”

“We did not come away with results that say it’s better than our Graphite 5 (G5) technology, and we’re not going in that direction.”

Meantime, and despite a little heated resin debate from all sides, G.Loomis, Hardy, and St.Croix will line rod racks across the country with new nano-silica based rods this summer/fall. With the 3M stamp behind them, the Nano Matrix buzz has awoken all those in the arena. But any back-and-forth will ultimately be settled on the water.